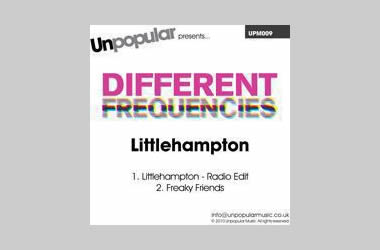 Different Frequencies are an intriguing prospect. A collaboration, of sorts, between a DJ/producer – Rob Watson – and a singer/musician – Benjamin McCourt, this band are received ample support from radio DJs Rob Da Bank, Zane Lowe and Annie Nightingale (who all happen to be from the BBC).

The duo’s music is exotically varied; in the past they have covered reggae, ska, house and rock. Their new single ‘Littlehampton’ – released through Unpopular Records – fuses funk with pop and dance. The vocals, which are fairly bland, sound like any male, indie singer featuring any female session vocalist. The music, however, is exciting stuff – brass and funky guitars add feel-good layers to some cleanly produced, pop perfection. It’s hard to believe that just two blokes constructed this tune.

The b-side – entitled ‘Freaky Friends’ – features the quirky but loveable lyrics ‘Let’s try imagining a strawberry’ repeated over and over. The music contains the same brass element of ‘Littlehampton’ but has more of a lounge feel to it – but fairly up-tempo lounge music, as if you’re dancing in that lounge.