“Not since the Blue Nile’s first recording has such well crafted music appeared from a Scottish band, Laura Donnelly’s voice as affecting as Paul Buchanan’. The time may be just right for Laki Mera to make the leap to more widespread acclaim.” – The Heral

“Something wonderful” – The Skinny 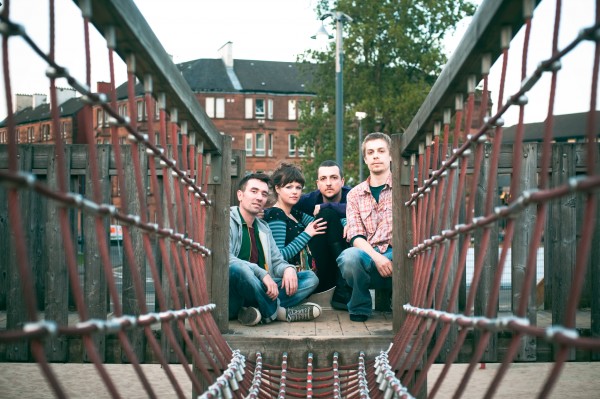 Glaswegian quartet Laki Mera extend and weave beyond the expected confines of genre with the May 30th release of their debut album ‘The Proximity Effect’ onJust Music. It follows their 2010 EP ‘Clutter’ which earned breathless comparisons with artists as diverse as the Cocteau Twins, Portishead, Blue Nile, RyuichiSakamoto and Radiohead.

On ‘The Proximity Effect’, Laki Mera’s eclecticism continues as they pursue fragile folk beauty (‘Fingertips’), flourishes of ethereal eeriness with vocalist Laura Donnelly’s tender vocals hanging in the ether like the voice of an imaginary friend (‘Solstice’) and a gloriously atmospheric clash of sinister electronica and enticing pop hooks on ‘More Than You.’ The audacious near instrumental ‘Onion Machine’ provides a mid-album highlight as it employs a retro-futuristic synth riff, an emotive layer of cello, stabs of grinding guitar and an angular time signature.

The majority of the album was recorded at the band’s own Carrier Waves studio in Glasgow which allows the band the freedom to spend as much time as they want in order to refine their recordings and to indulge in their sonic experimentations. For three songs (‘Double Back’, ‘Reverberation’ and ‘Solstice’) that required a more organic sound, the band decamped to a turf house in Achiltibuie, a small coastal village in the Highlands, to capture a radically different vibe from Glasgow’s often gloomy outlook.

The album’s title was born from an audio engineering term, but it also revealed a second layer of meaning. Collectively, Laki Mera wanted a title that would communicate how people connected on an emotional and psychological level. Not only did ‘The Proximity Effect’ possess a dual meaning, it also conveyed a parallel with the two key components of their musical approach.

Donnelly and Italian-born producer/multi-instrumentalist Andrea Gobbi met at a time when both parties were searching for new musical projects. When Gobbi added a rich electronic production to Donnelly’s simple vocal / guitar recording, it set the tone for things to come. Laki Mera’s ranks were boosted with the recruitment of drummer and percussionist Tim Harbinson, who had previously played with another local band playing live electronica, and the classical trained Keir Long(pianos / synths) who worked with Gobbi on producing scores for film and theatre.

Laki Mera are defined only by themselves: their music born from a love of innovative, technological exploration and organic artistry.