The Øya Festival & Field Day @ XOYO

Two of the nicest festivals across Europe, Øya Festival & Field Day, held a spectacular two nights event at XOYO to showcase some of the best talent around! Tear Me, Lucy Swann, Not Squares and Fiction were on the bill, below the feedback on them!

Team Me are a six piece indie pop outfit from Oslo. Crammed onstage with their menagerie of instruments, the band draw inevitable (though by no means negative) comparisons to Los Campesinos, with their fast-paced, harmonised pop and hand clap choruses. Unlike many indie pop bands however, Team Me’s music is multi layered and genre crossing. Some of their most beautiful moments are when they slip past the jangly teen ballads and into soaring instrumentals and stripped down keyboard led melodies. One of the highlights was the euphoric, building ‘Dear Sister’.

Newcastle born and Norwegian raised Lucy Swann fuses sampled beats and synthesiser melodies, with her stunning and fragile vocals. Unfortunately her intimate XOYO show had to be cut short when she exclaimed “sorry I think that might be burning”! So to avoid any electronic catastrophes, Swann only got through three songs, the last being a capella, over the top of a looped beat. Although not going to plan, this was an unexpectedly good way of experiencing the full force of Swann’s vocal power.

A more conventionally successful show followed at KOKO, where Swann opened proceedings. In these more energetic, clubby surroundings she was able to showcase the full range of her music. One of the best was the opener from her new album ‘La Petite Mort’. The song, ‘Fashionably Late’ is a mixture of Swann’s urgent and passionate live vocals, over loops of herself yelping, all backed up by a really classy eletro track. Something to get lost in.

Described by Time Out as “Herky-jerky, indie-synth, art-rockers” Belfast’s Not Squares certainly do their best to live up to their billing. To be honest they are exactly the kind of mad, energetic party band you want to dance to at 1am. The question of whether you would want to listen to them in the cold light of day is another entirely. One of their best is the bleepy ‘De Na Na’ with it’s yelped vocals giving a sense of urgency. Always a fan of unusual set-ups, I enjoyed watching them experiment with two bassists and the sheer amount of energy flying out of their drummer is certainly impressive. Perfect to end the sweaty night, but I’m not sure there’s enough content in their songs, beyond their sheer explosiveness to warrant further listens.

Initial thoughts about Fiction? Their super cool fairy-lit, stand-up drum kit in the middle of the stage looks very intriguing. And whatever music you play, it’s always helpful if you look like male catalogue models.

With their sound lying somewhere between Talking Heads and Foals in a good mood, the band are incredibly slick. They are clearly all masters of their instruments and look very serious throughout. Watching Mike Barrett play drums is a mesmerising experience. Single ‘Big Things’ is a great tune, that I can easily imagine crowds singing along to when this band (as they damn well deserve to) hit it big.

A very successful night that only makes you wish it was already festival season!

Amede Ardoin – The Father Of Cajun and Zydeco 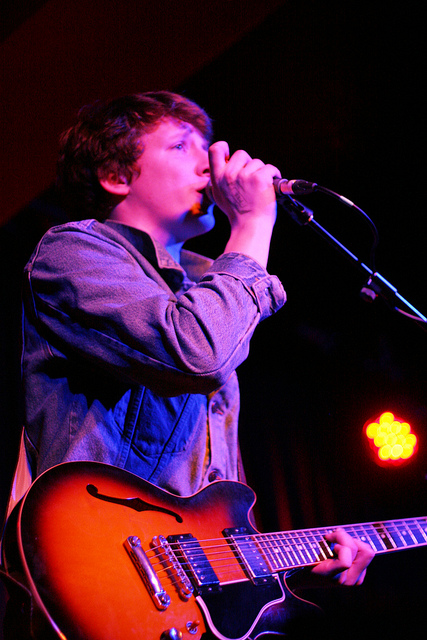