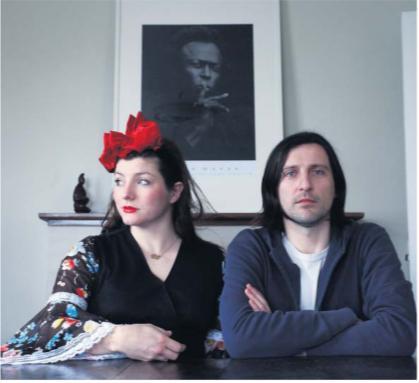 Following on from the release of Feldberg’s debut album (and single of the same name) ‘Don’t Be a Stranger’ the band are ready to announce the release of their second single ‘Dreamin”. The single has turned heads both at home in the bands native Iceland and abroad. ‘Dreamin” won ‘Song of The Year’ at the 2010 Icelandic Music Awards (previous winners include Sigur Ros & Bjork) and was selected by trendsetting French boutique label Kitsuné for its Maison 9 compilation. ‘Dreamin’ sees its release in the UK on the 11th April through Smalltown America.

Dreamin’ has also been chosen to feature on the Ministry of Sound ‘Late Night Sessions Compilation’ alongside The xx, Hot Chip and Moby which is due for release later this month.

Consisting of singer Rósa Birgitta Ísfeld and multi-instrumentalist Einar Tönsberg (better known as Eberg), Feldberg first came together in 2008. Einar had recently returned to Iceland from London and was looking for a vocalist to record ‘Running Around,’ a song he had written for an advert for an Icelandic shopping mall. “It was a lovely accident,” explains Einar. “I needed a vocal, somebody to do a female vocal. I called up my friends and they all said ‘You have to call Rosa.’ She was at my studio ten minutes later and she hasn’t left.” Rósa adds: “It was really comfortable from the very beginning, like it was destiny. I felt like I should stay once I was there. It’s kind of like a relationship without the romance.”

“We kind of decided not to analyse anything,” says Einar. “Our rule was just to do the first thing that came to mind. Keep it fun and simple. I guess we’ve both been in projects where we’ve over-analysed things and wanting to do the most special music in the world but now we just want to do what’s natural for us.”