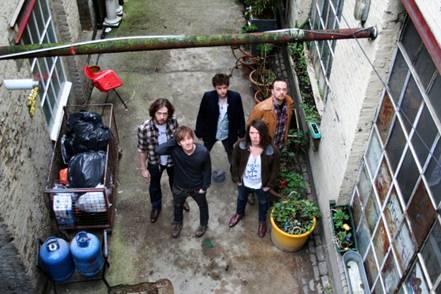 Passion for their craft is a trait that many artists claim, but with new EP, ‘King Island Coyote’, Billy Vincent prove that for them it is at the core of the music.

“For us it’s all about passion. If you don’t put your heart and soul into it, it’s pointless. And we give it everything we’ve got,” affirms co-singer and songwriter David Vincent.

Together with long-time cohort and best mate Bill Barratt, with whom he began playing music from their time at infant’s school, Billy Vincent create visceral melodies that veer from the heart wrenching to the raucous.

‘King Island Coyote’ perfectly showcases Billy Vincent’s musicianship and lyricism in its four captivating tracks. From the poignant ‘Prairie Wolves’ to the tenacious ‘They Break Bones’ contrasting with the mournful ‘Trouble Never Comes Alone’ and the deceptively sprightly ‘Tubes/Wires’, their latest EP is the ideal introduction to the band’s distinctive sound, dubbed by the band themselves as ‘dirty folk’.

Despite the extensive partnership of Bill and Dave, the current guise of the London based five-piece has been in place for a mere 12 months. Yet, when the band take to the stage and you witness the camaraderie of frontmen Bill and David it is easy to understand why they have captured the hearts of audiences from the Scottish highlands down to the furthest reaches of Cornwall.

With a second (currently untitled) EP to follow ‘King Island Coyote’ in June and their full-length debut album scheduled for a September release, all written and recorded whilst the band continue to enthral crowds with exuberant live sets, there is no arguing that 2011 is set to be a big year for Billy Vincent.

For a taster of the upcoming EP you can listen to the stream of ‘They Break Bones’ below. ‘King Island Coyote’ will be released on April 11th through Something Nothing Records.

SWEDISH HOUSE MAFIA, LEFTFIELD, 2MANYDJS AND MORE FOR T IN THE PARK