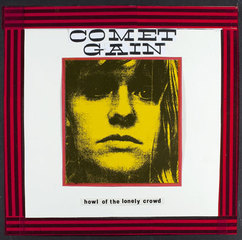 ‘Three in the morning in someone’s London apartment, unattached men and women not giving up on the night: At first you hear blithering, then the smartest blithering you’ve ever heard. Then shots in the dark: “There’s no security in purity.” Then anguish and hope, forgiveness and curses, and a heartbreaker from its title to the last note. By this point you’re hearing people you’d like to meet.’ – GREIL MARCUS

Comet Gain release their new album Howl Of The Lonely Crowd via Fortuna POP! on 16 May 2011.

Influenced as much by the riot-grrrl movement as by the music of the girl-group era, Comet Gain mix punk-pop aesthetics with a more abstract northern soul sensibility.  Unapologetically literate and emotional, and inspired in equal parts by The Go-Betweens, Godard, Irma Thomas, dance parties, Dexy’s Midnight Runners, falling in love, mod and hootenannies, Comet Gain insist on locating and articulating the romance and the heartbreak that permeate and terrorize the everyday, whilst refusing to slip into sentiment or mawkishness. The aesthetic they have made their own has chimed with and galvanized a slew of iconic bands and musicians; from artists like The Make-Up, The Yummy Fur, Jens Lekman, and Herman Dune, to a younger generation of DIY musicians like The Cribs, Let’s Wrestle, Male Bonding, Love Is All, Veronica Falls, and Crystal Stilts, Comet Gain’s influence remains a traceable and tangible thing.

Howl of the Lonely Crowd represents the fruition of the affection with which Comet Gain are held: recorded and produced by British musical icon Edwyn Collins, and Ryan Jarman of The Cribs, further production work was undertaken by Brian O’Shaughnessy (My Bloody Valentine, Primal Scream) and Alasdair Maclean of The Clientele, who also contributed guitar. With added input from Matthew Sawyer (The Ghosts), Helen King (Shrag), and a blast of Terry Edwards’ (Spiritualized, Gallon Drunk, The Tindersticks) legendary trumpet on the rousing mod anthem “The Weekend Dreams”, the record captures a band fully in their stride and able to realise their full potential. As Feck remarked on being given access to the full range of Edwyn Collin’s studio with its vast collection of guitars: “they (the guitars) look great and were played on great records, which I tried to channel in that way a tribesman would eat the brain of his smartest enemy – though I didn’t eat any part of Edwyn.”

Howl of the Lonely Crowd is the soundtrack to lives spent dedicated to seeking out the outposts of pop culture, an immersion that asks no reward beyond the music itself. On this record, with the patronage of their esteemed friends, acolytes and collaborators, we find one of the most treasured and exhilarating British bands around in full realization of their creative capacities.