Gaggle release ‘The Brilliant & The Dark’ for Record Store Day 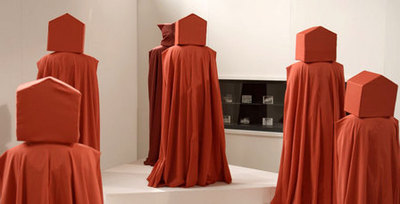 Documenting the Arts Council-sponsored performance at the ICA on December 2nd 2010, Gaggle will be releasing the operatic ‘The Brilliant and the Dark’ on 12″ vinyl for Record Store Day.

Limited to just 300 copies, the vinyl will be released on April 16ththrough Transgressive Records.

Refreshing and modern, Gaggle are the antidote to the traditional all-girl choir and were invited by artists Eileen Simpson and Ben White to rework a 1969 cantata for women’s voices.

The radically remixed cantata uses elements from ‘The Brilliant and the Dark’, a work for women’s voices composed by Malcolm Williamson and Ursula Vaughan Williams, and first performed by 1,000 women volunteers at the Royal Albert Hall.

The libretto approaches history from the Middle Ages to WWII through the eyes of women, via characters including witch-hunters, embroiderers, crusaders’ wives, plague stricken women, mourners and war workers, transposed into a modern light by Gaggle who reference 2011 issues such as militarized rape in the DRC or “honour” killings in the UK.

‘The Brilliant and the Dark’ is released under a copyleft license – generating a new resource available for the future reflected by the B-side of the 12” containing samples from the performance for future artists to manipulate as they see fit.

You can watch a video by Eileen Simpson and Ben White featuringGaggle performing an element of the reworked cantata here:

The Brilliant and The Dark from Open Music Archive on Vimeo.

Gaggle are playing Proud in Camden TONIGHT and will be announcing festival dates shortly.

“The most exciting, innovative and genuinely imaginative force in music right now” NME

“Beyond description” The Times