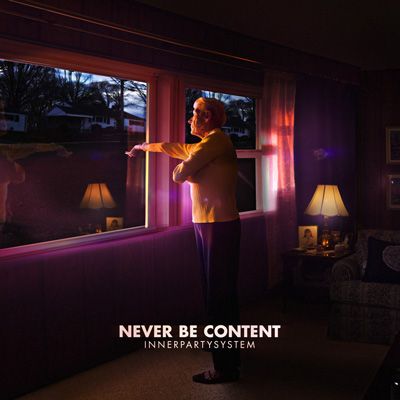 Listening to Innerpartysystem was surprisingly enjoyable.  I say surprising because their style of music similar to Aussie band Pendulum normally makes me nauseous, however the bands efforts to make pure electronic dance music rather than a mish-mash of other genres is commendable and leaves them light years ahead of others in the electronica.

For those unaware, Innerpartysystem made their name through a mix of alternative rock and dance; however their latest EP Never Be Content sees them focus more on the dance side of things, with their first single American Trash packed with both synthesisers and baselines throughout.

If there is a criticism to be had of the EP, it’s that the tracks outstay their welcome and go on for far too long.  Dance tracks have always had a tendency to go on for the five to six minute mark, but Innerpartysystem would be far more effective if they shortened the tracks down by a few minutes, making them more instant on the ears.  Whilst some of the instrumentals are pretty good, synthesisers always become tedious after a few minutes so there’s no need to drag them out.  On the plus side the vocals have been produced brilliantly to match the songs, adding to the music rather than becoming overbearing and detracting from the backing music.

On the whole, I’m really impressed with this EP.  At 5 years old Innerpartysystem are still young in the music world, but after a listen to Never Be Content I’m left patiently waiting on their full length LP, due out later this year.