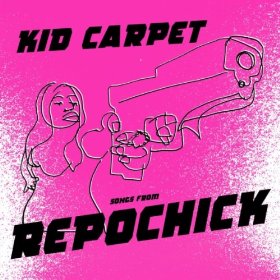 Kid Carpet has returned with his distinct brand of eccentric alt-pop with the release of his latest album Songs From Repo Chick. There is no fear of fans being disappointed with a record that is as inventive, outlandish and resplendently unique as his previous releases. The album is Carpet’s third offering of chaotic DIY music that flouts the usual conformity of indie-pop with an unapologetically anarchic sound that dissolves genre boundaries and refuses to be pigeon-holed.

Renowned for his use of children’s toys and unusual samples, Kid Carpet has retained his daring attitude and it has paid off! It is difficult to pick out specific tracks to listen out for as the album reads like a good book; it works brilliantly as a whole but becomes senseless if you attempt to just read a random chapter. The album is both puzzling and inspiring, fearless and unique, regardless of whether you like it or not it is a record worth listening to for its sheer ingenuity.

(The album provides the soundtrack for the forthcoming movie ‘Repo Chick’.)