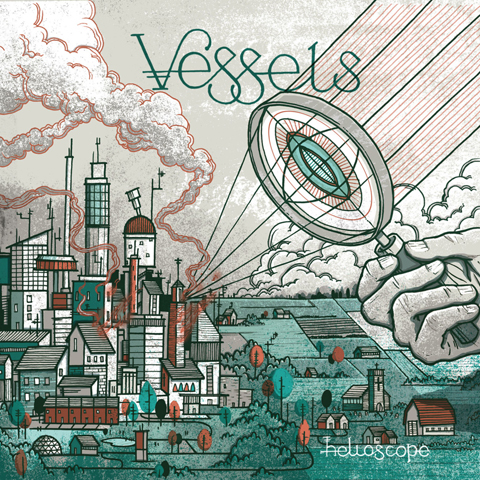 Being generally filed under the ‘post-rock’ label, it’s easy for Vessels to fall into the comparison with the likes of Mogwai and Explosions in the Sky.

But the quintet from Leeds is not quite a traditional post-rock band, all about perfectly executed guitar virtuosisms and stomping drums.

And ‘Helioscope’, their second studio album (and to my personal opinion, their first true masterpiece!) is not a traditional post-rock album either, all about 8-minute tracks of thundering crescendos and apocalyptic soundtracks to the end-of-the-world-as-we-know-it.

Vessels have proved their ability not only in the crafting of magical yet superbly precise instrumental tracks – like my personal winner ‘Later Than You Think’ or the manic ‘Art/Choke’ up to the atmospheric ‘Heal’ – but also their mastery in mixing their outstanding musicianship with unusual vocals-led songs like the mesmerizing ‘Recur’ – whose dialogue between voices and rhythmic section built up around the beats provided by drum-machine-disguised-as-human-being Tim Mitchell shades the likes of Juno – and the epic ‘All Our Ends’, that grows into an overwhelming crescendo of drones before fading into a synth-led quirky finale.

Since the opener ‘Monoform’ you can easily realise that the band has moved on from the typical post-rock antiseptic precision to get into the unexplored realm of personality and experimentation. The track reminds me somehow of Battles with its syncopated drums that draw an intricate path leading to ‘Helioscope’’s fantastic scenarios before giving space to vaster and more open atmosphere.

Another highlight is the haunting ‘Meatman, Piano Tuner, Prostitute’ where the gentle, open drumbeats and the tinkling guitars and synth provide the perfect backdrop to Stuart Warwick’s Thom York-esque voice.

‘Helioscope’ is a 360 degrees album, bold and beautiful, and unique in its own terms. The band has proved to have moved on from the sometimes-too-perfect songs crafting that characterises most post-rock outfits (and make them so stubborn to the ears of a new wave lover like the one I am!) giving space to individuality, without giving out on the precision and technical skills that made them raise to worldwide interest.

Despite being post-rock not my first choice when it comes to what-shall-I-listen-to-today, I’m totally sold to Vessels.