The Violet May – What You Say 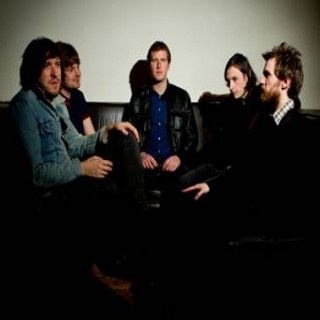 With a name as seemingly twee and carefree as The Violet May, one goes into this, a free download preceding a German tour with Stockton-on-Tees post punks The Chapman Family, expecting a gentle, carefree breeze of a song, perhaps with duetting boy-girl vocals about amorous affairs to an eclectic yet oh so chic soundtrack of Morrissey and The Moldy Peaches? So it’s a refreshing surprise to be veritably assaulted with some of the most self-assuredly badass Rock’n’Roll since The Kills first swaggered onto the scene on the coattails of That Other Boy-Girl Blues-Rock Duo. But this is more than just tired Velvets approximations, the Sheffield quintet do away with the looseness that is normally associated with this style of music, throughout the staunchly earthbound riffage and murmured vocals, hints of keyboards burble menacingly away in the background and the Glam Rock beat makes this feel shiny, fresh, and in a strange way, kind of sexy. The only criticism I have of it is that it can feel a little one note after repeated listens, but this is the perfect introduction to an extremely exciting band, exciting enough on its own merits, but gesturing towards even better prospects if you should stick around. I know I definitely will, but the question is, dear reader, will you?