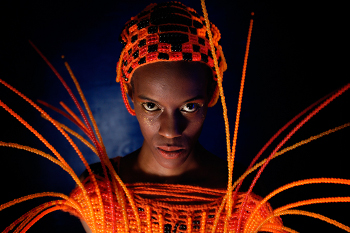 Barbara Panther releases ‘Empire’ on April 11th. It’s the first single to be taken from her self-titled debut album to be released through City Slang.

The truly unique and unconventional can be hard to come by… Berlin-based Barbara Panther is all of the above, and then some. Rwandan-born Panther grew up in Brussels, Belgium, before making her home in Berlin five years ago – the product of these unconventional beginnings is an unparalleled artist who blends musical influences and crosses boundaries of musical style innovatively and effortlessly.

Collaborating with Matthew Herbert, whose previous clients have included the likes of Björk, R.E.M. and Yoko Ono has enabled Panther to create dark and exciting sonic landscapes, fraught with vivid imagery and fierce beats. One such example is ‘Empire’.

Directed by Woof Wan-Bau, who has worked on videos for Mogwaiand Four Tet in the past, ‘Empire’ has a suitably surreal and twisted video, with flamboyant costumes and choreography to match.

The wonderfully dark video for ‘Empire’ can be seen here:

Considering her off-the-wall style and the air of mystery surrounding her, it comes as no surprise that Barbara Panther has already been compared to the likes of Grace Jones and Bjork. The singer’s futuristic melodies and style are implemented into a truly unique and explosive live show, seeing Panther set her vocal stylings, offbeat costumes and expressive movements to visuals.

To mark the occasion of the release of her debut EP ‘Empire’ on 10th September 2010, she played a one-off show on the City Slang stage at the Berlin Festival, accompanied by a five-strong live band of cellos, violins and trumpet, followed by an ‘Electronic Beats Presents…’ tour supporting CARIBOU.

With her debut album to follow on May 16th, ‘Empire’ is a fantastic introduction to distinctly bizarre world of Barbara Panther, don’t miss out or you’ll be left behind.