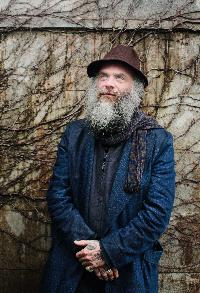 Legendary Baltimore experimental rock musician Daniel Higgs is set to play a few shows in the UK in April.

Higgs is known for his work as the sole lyricist and frontman of the band Lungfish, a four-piece enshrined as one of America’s last true folk bands. In recent years, Higgs has released a number of solo outings that can only be described as the ultimate in isolation, worlds away from the hypnotic, communal rock of his band.  His latest solo recording Say God was released earlier this year on Thrill Jockey. He also released a collaboration with sound artist and Nautical Almanac member, Twig Harper, called Clairaudience Fellowship.

Earlier this year we saw him him lending vocals to Peer Amid, the new album by Swedish drone/ritual rock group The Skull Defekts, which saw Higgs return to familiar Lungfish territory.