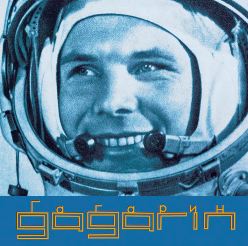 On 12th April 1961 Yuri Gagarin became the first human to undertake a succesful journey in space. He orbitted the Earth in his Vostock 1 spacecraft – code 3KA-3 for 108 minutes. Taking his his name for his solo music project, Gagarin plans to celebrate and commemorate this in a number of ways.

On 18th April Gagarin will release a download virtual 7″ single made up of 2 tracks – 3KA-3 ( the code no. of his craft ) and Kedr ( his personal call sign  ) which features audio recordings of his communications from space back to earth. The single will be available from all the usual digital stores – itunes, bleep etc and a special commemorative CD single is available only from the GEO page of Gagarin’s website or at his live shows. This features the tracks plus lovely artwork from polymath cock stroker Vince ” Umbridge ” Luttman. Heres a taster of 3KA-3 together with some original footage of the great man:

On 12th April itself, Gagarin will be playing a commemorative ambient set at Freedom of Expression, Green Dragon, Croydon – http://www.facebook.com/?ref=home#!/event.php?eid=121129801296194

On 23rd April – the big one ” I see no God up here ” spacial celebration at Club Integral alongside Spaceheads, Sound of the Sun vs Oscillatorial Binnage, Ken Hollings, Rucksack Cinema etc etc – The Grosvenor, Sydney St, Stockwell – this will be huge !   –   http://www.facebook.com/?ref=home#!/event.php?eid=132143430189057

Gagarin’s album, Biophilia is due out on June 20th and hopefully there will be additional gigs to promote the release – confirmed live dates as follows: