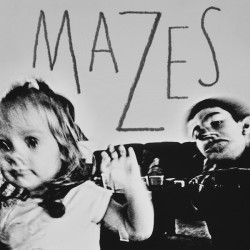 Without even trying, Mazes have the tunes and insouciant charm to win a permanent place in any sane persons list of most-cherished records. NME, 13th November

Well, this is something special. The very first time Mazes get access to a proper recording studio, and they turn out a bona-fide gem of an album with choruses and hooks aplenty. Recorded last November on an old lightship moored on the Thames opposite the Millennium Dome, A Thousand Heys (FatCat, 11th April) captures the excitement and fizzing energy of a band still in day-jobs with everything in front of them. And, by taking 10 instead of the usual one  maybe two – days to record, it delivers that energy while sounding like one of the freshest, most life-affirming collections any of us are going to hear this year.

Mazes appreciation of the D.I.Y ethos and sense of community amongst their peers – Pens, Cold Pumas, Male Bonding, Spectrals – stems from the attitude many of the acts they admire embraced. Jack runs Suffering Jukebox whilst Conan, also a member of Graffiti Island, is CEO of Italian Beach Babes, labels that are very much a part of what makes the UK scene so vibrant at the moment (Incidentally, a special limited vinyl version of Paradise Vendors/Italian Beach Babes Compilation 12″ will be made avaliable on Record Store Day, April 16th.)

A Thousand Heys sees Mazes dart in and out of their respective record collections with the rapacious enthusiasm of wide-eyed kids in the proverbial sweet shop. Opener Go-Betweens is a song influenced by the honeyed, major-key pop of the band the songs title references, embellished with Pavements wayward clatter, Buzzcocks intensity, and Big Star-esque nihilist lyrics. At other times – Marc Riley reckoned them a sort of really garagey Kinks and less like The Beatles, more like a crazed Monkees! – they can sound like a British Invasion group: Witness the syncopated McCartney bassline that kicks in on Surf & Turf, with lyrics that drop the referenceI get off planes like Beatles at JFK.

Extensively covered on the blog scene, much has already been made of Mazes ability to juxtapose measured three-minute pop songs with short bratty blasts. Although there is no Painting of Tupac Shakur, the thirty second thrash punk song found on the Italian Beach Babes mixtape (see their MySpace for details of previous 7 & tape releases), songs such as Till Im Dead prove they can still shred when they want to, whilst Eva sounds like a fleeting moment in time recorded for posterity. Conversely, the Dunedin Sound influenced Cenetaph is a beautifully delivered pop song that reveals an ambivalence toward spelling but a strong aptitude for songcraft, whilst No Way recalls early REM. Lyrics on the album display a similar range, from the idealised childhood and subsequent collapse into post-adolescent apathy of Summer Hits/ J&J Dont Like, to the youthful forcefulness of Death House to the world-weariness of Wait Anyway.

Props to studio engineer, producer and owner of Lightship 95, Ben Phillips then for the way in which he has captured these various aspects of the bands personality whilst helming an album that feels considered and focused. He has also paid respect to the lo-fi tradition of the band, which, whilst enforced by circumstance, added to a sense of abandon in Mazes more frenzied songs and gave a cloak of intimacy to some of their quieter moments. A Thousand Heys recreates a sense of unadulterated excitement and natural analogue warmth, while the freedom of recording in a studio has allowed the band to explore further, most notable on the track Wait Anyway, which includes a mid-section guitar duel reminiscent of Televisions Verlaine/ Lloyd stand offs and closes with an extended jam replete with a crushing bass riff and a wail of guitar feedback.

Mazes join a growing list of FatCat artists who have been actively involved in D.I.Y scenes which includes artists as respected and influential as Animal Collective, Black Dice and No Age. With such excitement growing about the release of A Thousand Heys, it seems Mazes are in good company.