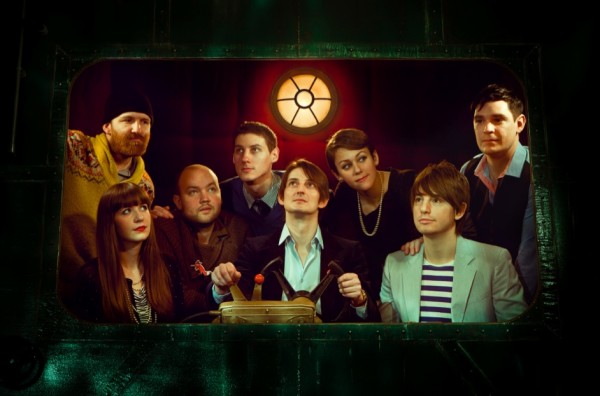 The Leisure Society has announced details of the release of their new album, a UK headline tour in May plus a new video starring Spaced/Big Train actor Mark Heap.

‘Into The Murky Water’, the 8-piece symphonic pop band’s opulent second album, will be released on 2nd May 2011 through Full Time Hobby. This is preceded by the first single off the album, the gloriously epic ‘This Phantom Life’ on the 25th April.

The band will also be playing a number of dates in May following the release of the album.

Tickets for the shows are on sale now via www.alt-tickets.co.uk

Watch this amusing clip here with Mark as a new age guru attempting to induct the band into his countryside retreat:

The band released their debut album, ‘The Sleeper’, originally through the Willkommen label in March 2009. It was later picked up and re-issued with a limited edition EP through Full Time Hobby in the autumn of the same year.

The album resulted in two Ivor Novello nominations for the tracks ‘Last Of The Melting Snow’ in 2009 and ‘Save It For Someone Who Cares’ in 2010 and scooped Rough Trade’s Album of the Year as well as iTunes best Singer/Songwriter album in 2009.

The Leisure Society came together when fellow Burton-Upon-Trent exiles Nick Hemming and Christian Hardy found themselves sharing a flat in London. Nick had previously played in bands in Burton with Paddy Considine and Shane Meadows and would later contribute scores for Meadows’s films ‘A Room For Romeo Brass’ and ‘Dead Man’s Shoes’ under the Leisure Society moniker.