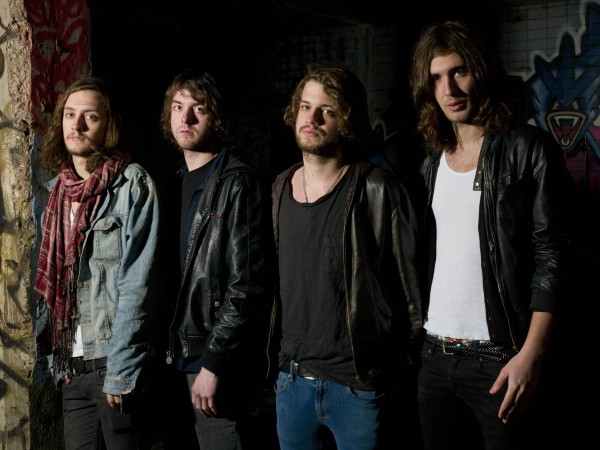 AAAMusic chatted with Adrian Weber from The Dandies about their music, inspirers and next plans…

AAAMusic: You are originally from Baltimora, but you live in Switzerland. How did you end up there?
Adrian Weber: Haha, it’s pretty easy actually… Haha my Mom is American, from Baltimore, my dad is Swiss, from Lucerne. So due to my Dad’s work we ended up there. Well that’s for my brother
and I. The other two guys in the band we then met growing up in Switzerland. But now we actually live in London. We moved here in January.

AAAMusic: Two brothers in a band: how do you balance private and personal businesses?
AW: We don’t really. My younger brother (Eric/Lead Guitar) is also my best friend. So it’s really a blessing.
The other two guys are my brothers from another mother if you know what I mean?!
We’re all best friends so it makes working together not feel like business. It’s just fun and we get to do it with the people we care about… each other.

AAAMusic: What are your views on Oasis break up due to constant outbursts between Liam and Noel Gallagher?
AW: I don’t really know. Oasis are, or were, a great band don’t get me wrong, but I’ve never been a huge Oasis fan.
I guess if you don’t get along there is no point really. They created awesome music. And then maybe it’s better to stop.
And to be fair, I quite like Liams new band Beady Eye. And everyone is excited for Noels solo record. So I think everyone wins in the end.
Because we still can have the Gallaghers around. Maybe not together but it’s still the Gallaghers!

AAAMusic: Your first single will be released in May but you’ve played live a lot. How’s the reaction from the audience been so far?
AW:The reaction to that song is good. We’re actually just really lucky to have people like all our songs when we play live.
We really, really can’t think the people enough who came out to support us and live music.
I think the single is good because not only does it feel like a single but it also gives people an idea of what our music is like.
I guess it sums it up, if you know what I mean?

AAAMusic:Your music has roots in many genres, such as American rock, garage, punk.
What’s your favourite band then?
AW: I have many. Kings of Leon, especially that first record (Youth and Young Manhood) is the reason I picked up a guitar in the first place.
It’s those garagy rock kind of bands that I adore. Early Kings of Leon, The Strokes, White Stripes, Jet and Black Rebel Motorcycle Club.
Those bands probably have the biggest influence on me. But then bands like CCR, Led Zepellin, The Stooges, The Beatles and The Stones are just as important to me.
The list could go on. We’re lucky that so many bands have graced us with their music aren’t we?! Haha.

AAAMusic: In what do you think you differ from the bands you cite amongst your inspirations (Kings Of Leon, Creedence Clearwater Revival, The Velvet Underground and The Strokes)?
AW: We listened to those bands and wanted to be in a band. So of course traces of their music can be heard in our music. And I think it should be. We differ from those bands because we are The Dandies. We learned form them but did what we learned form them
our own way. So, in other words, We listen to their music but don’t think: “What
would Julian Casablancas write now?”. We do what we feel is right.
We’ve been lucky that it’s come to us so far. But those bands will always influence us. Their the reason why we’re in a band.

AAAMusic: How’s the work on the album going? Who’s producing it?
AW: It’s going pretty well. Part of it is already done. We’ve got about 4-5 more tracks that are to be done.
Our Producer is Chris “Frenchie” Smith who has worked with and produced bands such as JET, …And you will know us by the trail of dead, The Dandy Warhols, Meat Puppets etc.
He’s become our mentor and good friend. Him and our manager are our favourite people to work with. It just feels like we’re one big family of brothers and I love that.
And he’s one amazing producer, let me tell you that.

AAAMusic:Who writes the lyrics? Can you tell us anything on the creative process?
AW: I generally write the lyrics. I write them because I’m the one singing them.
The creative process of a song, sonically speaking, is a child of the entire band. Everybody has a voice and everybody is listened to. We’re lucky that, most of the time, we all feel the same thing and want something to go in the same direction.
When it comes to lyrics I write them. And show the others and ask what they think. I get really self conscious because I feel I’m giving away a lot about myself sometimes.
So I really care what my best friends think. I they don’t like it I know they’re the ones to know best and I go and rewrite them. Until everyone can say they like it.
I won’t let them actually write them though.

AAAMusic:When and where will we see you playing next?
AW:Well we’re coming on tour with Meat Puppets in May. We’re really excited for that. I mean… it’s the Meat Puppets! Wow!
We’ll be playing in Italy too on that tour in Brescia and Livorno I think. After that we’ll still be touring Europe with The Dandies and will come back to Italy for more shows in different Cities.

AAAMusic:Which festival would you like to play?
AW:Any festival with a good line up and an awesome atmosphere really.
Which pretty much makes it any festival right now, haha. But Glastonbury of course would be amazing some day. This year though, if I could have us play any one festival it would be Coachella in the USA.
That line up is absolutely rad!

AAAMusic: Amongst your web links Myspace is missing: is there a specific reason why?
AW: It is? Haha, I didn’t even know. Maybe some new Layout is being done
or something. But I didn’t even realise it’s missing.

AAAMusic: What do you think works best as a tool to get yourself known: Internet or a
stage?
AW: Both. The internet should be used to hear of a band. Like, find out about a band.
But to get to know a band you have to go see them live on stage. A good live should band dish out their heart and soul at every gig.
Show the audience how greatful and thankful they are that every person is coming to see them. That’s how I feel when I’m on stage, that’s what I want to see when I go to a concert… You can’t get that from the internet. Then if you like the band live, go back to the internet follow them, so you can go see them live again.