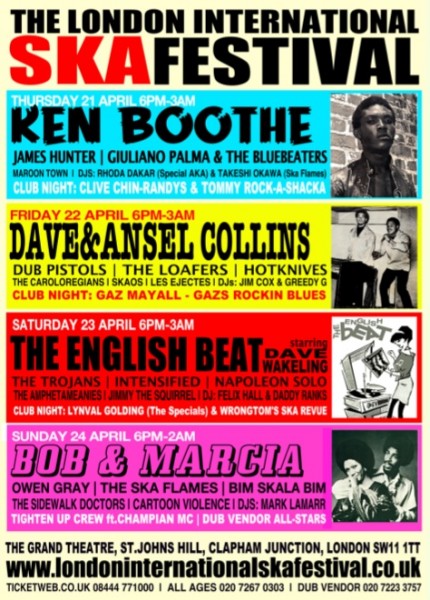 The fantastic LONDON INTERNATIONAL SKA FESTIVAL returns to London for it’s second celebration of all things Ska this April. Set over four days at London’s iconic Clapham Grand Theatre and featuring 22 bands and 10 DJ’s from around the world alongside some extra special exclusives.

The festival showcases the finest global talent from the Jamaican originators and the rhythm and blues sounds that inspired them through the progression into rocksteady & reggae, 2 Tone and right up to date with 21st century ska sounds. There is something for everyone.

Headliners include Jamaican legends Ken Boothe, famed for his UK No.1 hit ‘Everything I Own’, one of reggae’s most influential singer/songwriters Bob Andy, who will be teaming up once again with the ‘Queen of Reggae’ Marcia Griffiths for a UK exclusive, their chart topping duets as Bob & Marcia included ‘Young Gifted & Black’ & ‘Pied Piper’.  Reuniting for the first time since the 1970’s will be Dave & Ansel Collins, who will be celebrating the 40th anniversary of their UK No.1 ‘Double Barrel’.

From the 2 Tone era we have The English Beat, starring Dave Wakeling… the lead singer and songwriter of The Beat (or The English Beat as they’re known in the USA, where he now lives & tours). Expect their classic top 10 UK hits ‘Mirror In The Bathroom’, ‘Too Nice To Talk To’, ‘Hands Off She’s Mine’, their 2 Tone single ‘Tears Of A Clown’ and new material in this rare UK appearance.

Also gracing the festival is Grammy nominated sensation James Hunter, rightly described by Van Morrison as “one of the best voices in British R’n’B and Soul” and from Japan, playing their only European show, a band to rival The Skatalites, The Ska Flames.  Also jumping onboard will be  Sunday Best’s dancefloor killers, the Dub Pistols, Gaelic Ska adventurers The Trojans plus two bands that played the original London Intl Ska Festival in 1988 reforming for one offs; The Loafers and Hotknives.  As if this wasn’t enough from Italy a band that has released six gold selling albums, the highly stylised Giuliano Palma & The Bluebeaters. There will also be an exclusive show from the mighty US ska champions Bim Skala Bim, plus UK stalwarts Maroon Town, Intensified and The Amphetameanies.

We are delighted that Owen Grey is also confirmed as a special guest for Sunday. Owen is one of Jamaica’s true ‘Foundation’ singers and Alpha Boys School graduate his work spans the R&B, ska, rocksteady & reggae eras of Jamaican music.  He recorded for many of the greats: Prince Buster, Duke Reid, Leslie Kong, Clancy Eccles & Bunny Lee and was one of the first artists to be released on Studio One & Island Rcds, undeniably a true legend and pioneer of Jamaican music.

Added to all this is a stella line up of DJs, from club specialists to band cameos, radio disc jockeys to JA legends, including Clive Chin, boss of Jamaica’s vital Randys Records, celebrating the labels 50th anniversary, Lynval Golding (The Specials), Mark Lamarr, Gaz Mayall (Gazs Rockin Blues), Rhoda Dakar (Bodysnatchers/Special AKA) and many more.

From it’s birth in Jamaica, Ska has come along way, morphing and inspiring every generation and reaching all corners of the world to form a rich tapestry so important to our musical history. This April we will once again be welcoming back to London this celebration of the wonderful world of SKA in all it’s colourful guises.

For all up to date news, line up and tickets go to www.londoninternationalskafestival.co.uk

CONFIRMED LINE UP SO FAR:

THE ENGLISH BEAT with DAVE WAKELING

CRYSTAL STILTS In Love with Oblivion