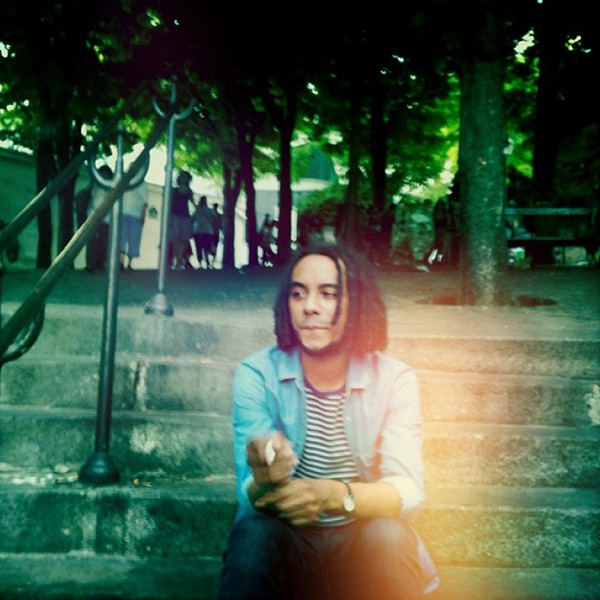 Son of a British father from Trinidad and Tobago, and a Mauritian mother, Pierre’s early years were spent near Liverpool before moving to Manchester at 18 for university. Although he had already dabbled in poetry and guitar, it was in Manchester that music became the central focus of his life. Not long after befriending the creative promotion team Akoustik Anarkhy, Pierre began his own weekly club night Friends Of Mine and threw a series of raucous house parties that lead UK Nightlife guide City Life to say “if Manchester music really is going though a golden age of partying and cool DIY indie club nights, then Pierre Hall is unquestionably the city’s chief party organiser.” It was during this same fertile period that he fronted the short-lived but much-loved Brit-Pop band Lead Balloons.

In October 2009, just as Lead Balloons were ending their time together, Pierre was in a serious automobile accident that left him unable to walk for nearly six months. Although the recovery was tough, and this was a dark time in his life, it also changed the way Pierre approached his art. Naming his new project Golden Glow as a tribute to the band Felt and their track “Sunlight Bathed The Golden Glow” he began to write songs that captured what he was living through. Starting simply, and sticking to the DIY aesthetics that have marked Manchester bands since the first days of punk, songs were written and recorded on a four-track with minimal equipment and no grand plan for where things might end up. While the recordings may have originally been thought of as demos, it quickly became clear that there was an intimacy and rawness to the songs that were as much a function of the situation they were being recorded in as they were of Pierre’s writing and performance. Being home-ridden and unable to live his active life led to beautiful songs that mixed hope and sorrow. Not quite knowing how to work the equipment in front of him led to a sometimes distorted, yet always captivating blend of Brit-Pop and shoegaze that would not exist under any other circumstance.

Being confined to the house opened up other avenues for the suddenly prolific musician. Hours on the internet led him to bands he hadn’t heard, and outlets for his music he had no idea existed. The key chance of fate happened when a few Golden Glow tracks landed in the hands of Jacob Graham of Brooklyn indie-darlings, The Drums. After meeting at a Manchester concert, The Drums asked Golden Glow to open their NME album launch in London. Quickly putting together a band of his friends from the Manchester musical community, Golden Glow’s first show was a big one. The relationship between Pierre and The Drums continues to thrive as they featured “Adore Me” on the new label, Holiday Records, compilation The Good Harvest Vol. 1.

Golden Glow – Adore Me from Mush Records on Vimeo.

By late 2010, Pierre Hall had completed the set of songs that were to make up the Golden Glow debut, Tender Is The Night. He had also started to apply the same lo-fi aesthetic to a series of music videos. Using super-8 shots of his life, and learning to edit as he created, the videos and the music matched perfectly. The string of positive press has been constant since “Adore Me” was given the seal of approval from The Drums, and Pierre has put together what will be the Golden Glow live band. He toyed with the idea of re-recording the songs in a cleaner studio. Then he thought of releasing the songs in their original form but limiting the outlet and calling them demos, but everyone who heard the tracks gave the same advice. Don’t ruin the magic captured on that four-track. Don’t clean-up the charm. Release the music as it is.

Golden Glow’s debut album, Tender Is The Night will be released in all of its distorted beauty by Mush Records with help from the label Bleeding Gold, who will handle a limited run of vinyl. The eleven-song album kicks of with “Adore Me” – a perfect piece of music that at once captures three generations of Brit-pop, from Joy Division to The Libertines. Whether on the album’s more pop-based tracks (“Locked Inside” “Books” “Streetlighter”) or the more hazy meditations (“The Blizzard” “On My Own”), Pierre Hall proves himself a master at capturing meaning and feeling in a four bar verse. The recordings are raw. The performances are perfect in their obvious imperfections. Tender Is The Night is the record to introduce Golden Glow to the world.

Golden Glow – Adore Me by MushRecords