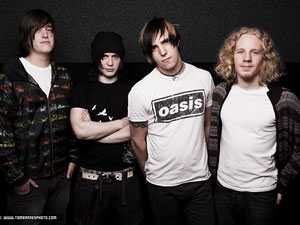 Ok, I strongly doubt I’ll be the first to ask this question but I think it deserves asking. What in the name of shittington blimey is up with slick, post-hardcore minded bands coming from South Wales? There’s been a quantifiable fuckload ranging from the spellbinding to the excruciating and GO–X are the latest in a very long line of those self same bands, and call me lazy to find that their main point of comparison is in geography but I’m sure it won’t be just me that finds GO-X’s sound in a suspicious amount of debt to those bands that came before them. And therein lies the problem, this is competent stuff, some of it, like third track Frame, is done with a panache and vim that borders on great, but if you’re even casually acquainted with modern British rock, you’ve definitely heard this stuff done worse, but you’ve also heard this done much better as well.

Which is a shame, these lads can really play, as shown in closing track On Vogue, which leaps time signatures like early Biffy Clyro and features singer Josh Lindner trying his hand at something resembling rapping with slightly bizarre results, and the four tracks are all powered through with confidence but they just don’t have much in the way of a single characteristic that isn’t shared with at least 5 other bands. In all though, these are young guys, and they have enough going for them to be ones to watch and see if they can develop a style of their own, and going on this E.P’s evidence, that could quite possibly happen.