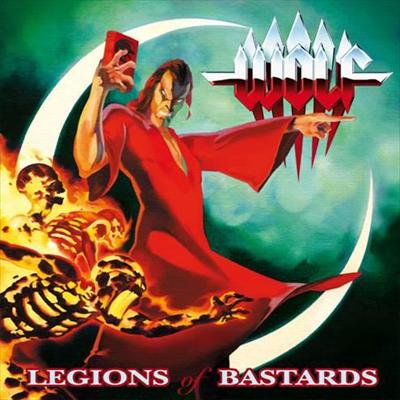 With a band name like Wolf, and an album title like ‘Legions Of Bastards’, it really is hard to imagine a greater level of heavy metal without edging into territory of Spinal Tap. And Wolf are head, shoulders and pointed headstock above the onslaught of * cough cough * “metal” bands we are told are the next best thing by Kerrang and the such.

The opening salvo of ‘Vicious Companions’ is a manic white-knuckle ride of tempered steel. No atmospherics, just tempertuous drums leading into a set of heated and fast-paced riffs, wailing snarls in equal measure from vocalist Niklas Stalvind and the guitar attack of the appropriately-named Johannes Axeman. The thrilling chorus clouts me with a dose of Diamond Head before we’re carried into a taut and stunning guitar solo duel.

As a sweat-blood-and-no-tears chaser, we get the searing ‘Skull Crusher’, which combines the sprinting, agile body of early 80s heavy metal with the lyrical intelligence of Lemmy’s socially-aware moments. So Iron Maiden covering ‘Orgasmatron’, and I am sure that given the stomping rhythm section, swaggering bass grooves and tight-as-hell riffs all around a seething vocal delivery and serious musical ability, many a metal fan will indeed be a little aroused. The Motörhead-isms can also be found in the tumbling percussive onslaught of ‘Full Moon Possession’, rampant skin-beating holding up some of the finest metal that has come from my speakers this year. Perfectly-paced melodic shredding, an addictive mosher of a bass attack built up into a rhythmic cliffhanger of a pre-chorus brings us into what is, quite possibly, the best chorus riff I have heard in far too long.

The fluid, feral lope of ‘Jekyll & Hyde’ is a rhythmic gem, and the soloing lead intro is a beauty pitched far back enough to allow the main body of the instrumentation to breathe. The closest we get to emotions, the melodies offer headbanging beauty to counter the bloody-minded incisive swagger of the verses, and an exploration of a man’s double-life.

We get a trippier, darker midsection of the album: ‘Tales From The Crypt’ easily the most baroque offering here, with a mock-classical bent to the riffs, but we are by no means slacking the pace. Exhilaration abounds in the lightning delivery and powerful vocal performances. As for ‘Absinthe’? How many bands can really make an arrhythmic madness of an opening stop-start stagger work that well? Without dropping the pace in the slightest, layered yet unpretentious instrumentation and a shifting tempo combine with phased backing vocals to create a hallucinogenic pseudo-thrash beast. Cap it off with the creeping atmosphere of ‘Nocturnal Rites’, but just when you think the band may have stepped into the land of the moody intro, we are thrown a feral, stomping rocker that sparks the blood to life like a napalm I.V.

To close, we have a surprisingly intelligent set of tracks. Remember the earlier mention of politically-aware lyrics? Well, this returns in full glory here, but not once dragging down the songs. ‘Road To Hell’ is a marathon sprinted at a million miles a minute, technics and passion and an eye forever on the spirit of rock making some serious fireworks, as with the even heavier, even greater ‘False Preacher’, with a fantastic vocal performance that blends restraint and full throttle without a single moment of doubt. To close, ‘K-141 Kursk’, easily the best metal song concerning a submarine really does provide a gobsmacking finale to such a great album. There are few people who could ever hope to make Russian submarines genuine exciting moshpit material, sinister and sublime.

Initially, I was agnostic to the band’s serious metal trappings. But given a second round with ‘Legions Of Bastards’, my cynicism was beaten to a pulp and I saw that Wolf are reminding us why we of the leather and denim in all weathers brigade fell in love with the mighty genre to begin with: it’s not the fantasy, it’s not the epic silliness, and it’s by no means all the keyboards and effects and attitude problems we get tacked onto heavy metal these days. No. We had our hearts stolen by people who simply wanted to pick up instruments and play them loud, fast, and really bloody well. Power ballads be damned, we are rocking out all the way. That sacred space on your shelf between Motörhead and Dio? Consider it filled.