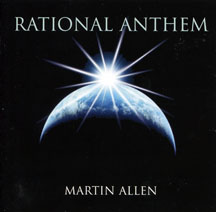 ‘Rational Anthem’ is the debut album by new singer and songwriter Martin Allen – an old, grey haired, litigation lawyer. Talk about biding your time. So, Martin Allen must’ve thought he had something pretty special to record, and needed to “get off his chest” (as he says), after a lifetime removed from the music industry. Is ‘Rational Anthem’ something special? Not quite.

This record is a mixture of piano-jazz (‘Private Tune’), Leonard Cohen’s poetry, 60s pop-rock (‘Something Missing’), folk (‘Back Here’), and lounge music. There’s also a miniscule element of light, prog-rock – as on the semi-psychedelic ‘Lonely Paradise Waltz,’ one of the more interesting tunes on offer. So, a real mix-bag of genres and influences. For the most part, however, this is fairly bland stuff – the sort of music that one would play in the background of an upper-class dinner party, or in a jazz bar of a high-starred hotel.

The orchestration of the songs is attractive, with plenty of violins and trumpets adding some extra depth to the relatively simple songs. Rich Durrant – of The Ukulele Orchestra of Great Britain – is the man behind the music, having arranged the songs and performed all the guitar and bass parts. The backing band – including Barry Cryer’s daughter, Jack Cryer, on backing vocals – are all accomplished, and the production in decent for a debut. The problem is that though Martin Allen’s voice is delightfully light, ranging from pretty flutters to warm croons, it’s just nothing out of the ordinary, and certainly nothing memorable. ‘Rational Anthem’ merely sounds like a lazy Belle & Sebastian album (especially on ‘Boy In The City’). But this is certainly worth checking out if you like your pop-folk-rock laced with light baroque and jazz-bar elements.