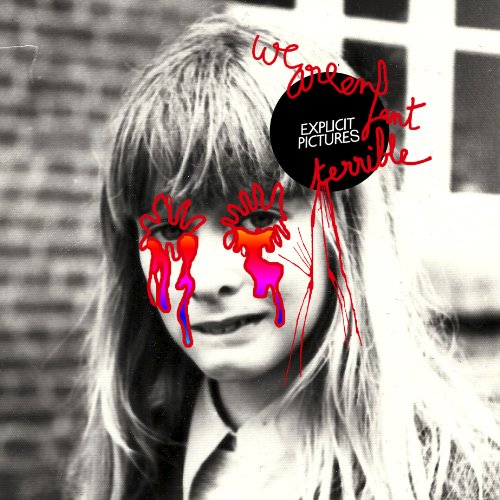 As my long-suffering family may be quick to tell you, my listening habits can be eclectic, bordering on the mind-bendingly annoying, like revising to a shuffled playlist of Skinny Puppy and Tibetian folk music. However, some things remain beyond me, and unfortunately We Are Enfant Terrible’s glitched-out pop cut, ‘Explicit Pictures’, is just such a creature that has somehow slipped the net.

I can’t quite place a finger on exactly why it failed to warm the ears of my heart. The songs are well-constructed, concise little slabs of wonky pop melody channelled through borderline sinister 8-bit synths. Opener ‘Make You Laugh’ features a simplistic percussion 4/4 stomp underneath a seductive, sneering melody a la Nintendo, and ‘Filthy Love’ is another scuzzy electro dancefloor track that is sexier than anything that bears comparison to the Tetris theme should ever be. Retro sounds combine with modern production clarity, especially in the fuzzed-out, French-accented vocals that pour out louche choruses like there’s no tomorrow, and given the eternal club night of the group’s headspace, there might not be. The bass-driven grind of ‘Because Of The Bees’ injects a sense of summertime rock, having the possibility of guitars in the instrumentation alongside distorted synth and a haze of effects.

The pop numbers are countered by the lairy strangeness and glaciality of heavily electro tracks. ‘Lobster Quadrille’, despite its simplicity, is bewildering to the point of inaccessible in execution, equal parts dreamy pop and the soundtrack to taking a copy of Pong out on the pull. ‘Sick Crooner’ Amps up the game with darker melodies and a more sinister, chaotic edge to its multi-layered instrumentation, and ‘Flesh N Blood Kids’ is almost My First Aggrotech for the fair-weather pop brigade, with a sprinkling of Gary Numan and harsher rock tones in the bratty Europop.

The triplet sneers of ‘Spade Attack’, ‘Wild Child’ and the sassy ‘Nectarine Dream’ (the last of which does occasionally heft a dose of scuzzy android appeal in addictive loops) try to tantalise in their Gallic cool, but the deadpan vocals aren’t so much smooth as soporiphic, with very little to rough up the ears and catch interest, being too familiar in melody and too smooth in sound.

Some songs, however, I feel like I’ve heard before. ‘A Song To You’ just sounds like Lilly Allen through a cloud of electro and dry ice. Smoky, distant vocals and airy melody are initially sassy and tempting, but feel rather pedestrian for all the glitchy beats they tout, ditto with the almost spoken-word ‘Shanghai’, with its jilted lyrics and odd hybrid of level-up sound effects and menacing shimmer of chromatic synth bridge.

As for ‘So Fine’, it almost succeeds in creating an eerie yet sleazily unnerving portrait of eroticism in decidedly unerotic sounds, a pop song of the uncanny valley, and the vocals are at their most animated for perhaps the entire album.

But herein lies the problem: the vocals, while having an air of the vamp about them, are so laid-back and aloof that they simply sound bored of the rather clichéd lyrical subject matter, especially through a thick layer of effects that remove them from the listener. In addition to this, the melodies are perhaps too repetitive and above all, the album just feels far to “cool”. The overproduced 8-bit sounds travel from deft to zeitgeisty gimmickry in no time at all, and in many cases, feel like an excuse to appear more leftfield than the band have merit to be. Because beneath the surface, ‘Explicit Pictures’ – for all its attempted pulling of the strange card – isn’t really too far removed from at least ten other electro-rock releases this month alone.