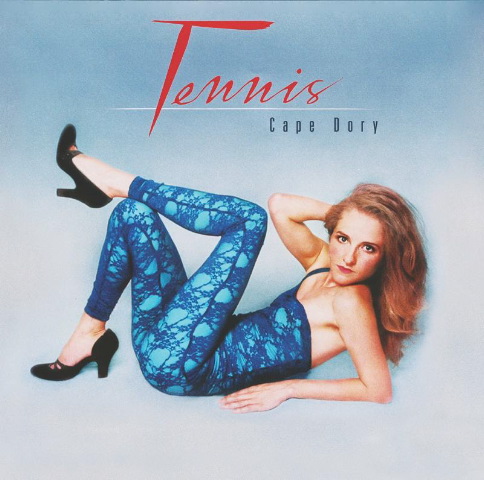 Tennis – “Take Me Somewhere” from Ian Perlman on Vimeo.

If ever there was a band to set the blogs in a frenzy it would be Tennis – you might have heard a track called “Marathon” in early 2010 ; an instantly infectious slice of perfect pop which set a tale of sailing the high seas to a glorious backdrop of chiming guitars, handclaps and Spectoresque “oooo’s”. As utterly captivating as it was transportive, the track was subsequently hailed by tastemakers such as Pitchfork, Stereogum, Gorilla vs Bear and the Guardian, in the process throwing a spotlight on the band behind the song – the married husband-wife duo of Tennis.
Originally hailing from Denver, Patrick Riley and Alaina Moore started Tennis in a rather more offbeat way than most – bored of the humdrum 9-5 life, the couple abandoned it all, saved up for a sailboat, and then embarked on a lengthy 8 month voyage along the Atlantic coastline, documenting their trip in song along the way. Once word about their beautiful, shimmering doo-wop meets surf pop spread however, labels such as Underwater Peoples and Fire Talk came calling. Now the bands debut LP “Cape Dory” lands on UK shores , released through Carmen San Diego Records on May 23rd.
The 10 tracks on ‘Cape Dory’ are a snapshot of the couples aforementioned getaway along the Eastern Seaboard and what a swoon-inducing expedition it must have been. ‘Take Me Somewhere’ is the perfect introduction, a woozy, nostalgic wave of simple guitar hooks, the hum of an organ and exuberant choruses which shimmies along until picking up pace at mid-way point. ‘Seafarer’ sweeps by as fuzzy guitars perfectly compliment Moore’s voice, cooing and girlish, as she simply asks; “Will you call on me when you’re living on the sea?.” Recent single ‘Baltimore’ is brimming with breezy abandon, wrapped around Moore’s warm, star-crossed vocals and Riley’s chiming guitars, and never has trouble at sea sounded so blissful as on ‘Marathon.’
An album filled with romance an adventure, the early promise of Tennis is fully realised on ‘Cape Dory’ and it is essential summer escapism. The duo embarked on a string of sold-out dates in the UK and European in January gaining ardent support from the likes of the Guardian and NME, and recently completed a full US tour and showcase at SXSW. They return to Europe for a smattering of festival appearances this summer and if their winter jaunt was anything to go by these dates will be utterly essential.

The debut album “Cape Dory” is released on May 23rd

“The spirit of early Phil Spector productions, but with a dreamy, melodic pop edge that would melt the most cynical of hearts” – Guardian