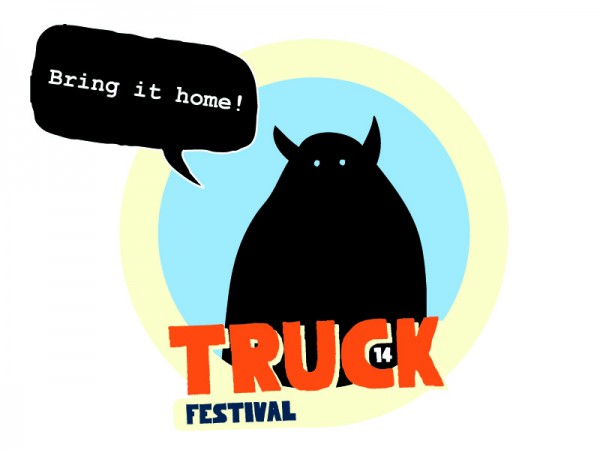 And finally…look out for a hairy and horned behemoth, the Truck Monster is on the loose!

With Truck Festival’s folkier, younger, greener and mysteriously beardier brother Wood Festival just over a fortnight away, Truck HQ is a buzzing hive of activity at the moment. As the final arrangements are made for the first festival of the summer from Truck, the team are also busy working on Truck 14 taking place this July at Hill Farm in Steventon. Before the Truckers decamp to Wood for a weekend of fully sustainable, folk tinged, family focussed fun (with a pit stop at The Great Escape music convention in Brighton next weekend where Robin Bennett will be discussing the history of Truck Festival in a case study session), they’ve got some more acts to announce for this year’s Truck.

Oxford’s finest adopted sons, Young Knives, kept it intimate playing in the Truck Store on Record Store Day but they will no doubt bring out the big guns and get expansive when they play the Truck Stage right before headliner Gruff Rhys on the Saturday night of the festival. On the back of yet another fine album, Ornaments From The Silver Arcade, Truck are very pleased to welcome back their good friends for the first time in several years.

You haven’t been able to open a magazine (except perhaps Gardener’s World) for months now without reading gushing commentary on Oxford’s Blessing Force scene/community/thing but it’s not just talk, the collective easily live up to the hyperbole with some amazing bands and artists under their umbrella. Over the years, Truck has booked various incarnations of the acts who now form the collective to play the festival but this year, the entire Saturday programme on the newly-expanded Last.fm stage will be given over to Blessing Force talent. Joining already announced Chad Valley, Pet Moon, Trophy Wife and Jonquil will be:

Durrty Goodz – Goodz is without doubt the most promising MC the UK underground has produced in the last few years. With a sharp tongue, super-fast rhyming ability and clever lyrics all eyes are on Goodz right now.

The Last.fm Stage returns to Truck for the second year and will also be the home to performances on the Sunday from Reading’s Pete & The Pirates and long-time Truck favourites Electric Soft Parade. Liam Finn has also been confirmed for the Transgressive Records curated bill on the Friday on the Clash Stage.

In other Truck news, rumblings of the existence of a hairy and horned behemoth strolling the streets can be confirmed – the Truck Monster is alive and well and just may be right round the next corner. Having already socialised with the shoppers of Oxford whilst hanging out on the High Street and Oxford United supporters when he took to the pitch before last Saturday’s game, Truck Monster is now looking forward to meeting many new friends over the next few months as he travels the country. Rumours of Truck Monster gate-crashing the Royal Wedding reception and being lined up for an Eastenders cameo are currently uncorroborated. Anybody snapped snuggling up to Truck Monster is in with the chance of winning a shopping spree at the Truck Store (see facebook.com/TruckFestival). Who said the future of marketing was digital only?!

Weekend tickets for Truck are still less than £100 taking the prize for the best value mini-holiday music lovers could wish for in 2011. But for those who fancy some Wood and Truck action this summer, there’s an even better saving if they snap up a Super-Trucker ticket at just £170 for adults and £120 for a young person (13-17 years).