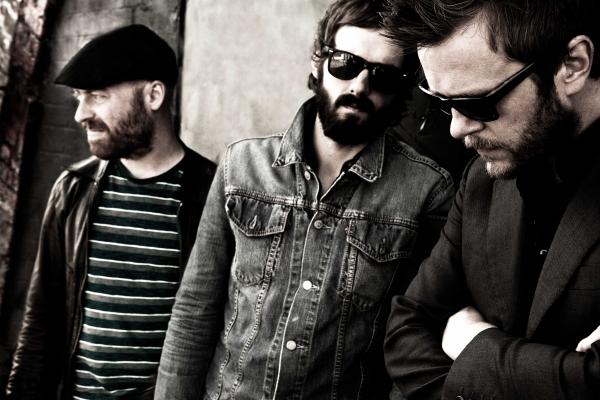 AAAMusic met Malcolm and Ben from Tape The Radio, find out what we talked about!

AAAMusic:  How did you feel upon completing the recording of Heartache and Fear? Did you manage to achieve exactly what you wanted?

Tape The Radio: Relieved and exhausted! It was quite a long process in lots of different studios but a great experience all round. Towards the end, Alan Moulder was mixing tunes in one studio and I was finishing vocals in another part of London and jumping between the 2 places! It was pretty full on. We’re very happy with the record and looking forward to the next one.

AAAMusic:You are considered one of the hardest working bands in town – how true is it and how does it feel to be considered as such?

TTR: I’m not sure who started that rumour, but we do work hard yes. Hopefully we’ll be working even harder soon. I think everyone needs to bust their ass nowadays to get there music out there so being a hard working band is just part of the deal.

AAAMusic: Do you believe that hard work always pays off eventually then, or else, you ought also to be lucky?

TTR: I always liked Ozzy Osbourne’s quote that it’s 1% hard work and 99% being in the right place at the right time. At least I think he said that, anyways, I think you definitely need a bit of luck and good timing, but persistence and belief in yourself is crucial.

AAAMusic: What are you ready to give up in exchange of a successful career?

TTR:I don’t think I have anything left to give up, I’ve already given it! Maybe paying bills and worrying about money?

AAAMusic: How has Jim Lowe (the producer of the album) helped you with the recording of the album?

TTR:I think Jim helped us in the sense that we are a very hands on band and we needed an outside perspective. We’ve always done all of our own recordings and it’s easy to lose yourself in it when no one is their to tap you on the shoulder and let you know a certain idea might not be as great as you think.

AAAMusic: One of the tracks is called 1989 – to what does it refer to?

TTR:How many lines of coke Bryan our drummer has to do before a show.

AAAMusic: Who do you look up for inspiration?

TTR: All kinds, we have  pretty diverse musical tastes, anywhere form the Cure to Chuck Berry and back again.

AAAMusic: You opened for many bands last year. How has the audience reacted to your music?

TTR:We’ve had some amazing responses from the crowds. You never know what you’re gonna get opening for a band, and we’ve never been disappointed I have to say. We’ve played with a pretty wide spectrum of band’s and we’ve always gone down well so I think we’ve got a pretty broad appeal.

AAAMusic: Have any of the bands give you any advice on how not to sink in this industry? Or any other type of advice?

TTR: Not really, we all usually just end up drinking beers together and partying.

AAAMusic: Any summer tour plans/festival? Plans for headlining tour in the UK/Europe?

TTR: We’ll be heading back to Europe in July and before that doing some shows up and down the UK, then we’ll be off to the US as we’ve been getting some love out there. End of summer back to Europe.