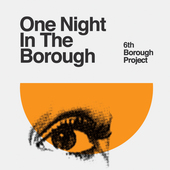 Delusions Of Grandeur have had an exceptional couple of years since their inception in 2009 with fourteen vinyl 12’s from a host of producers helping to put them at the top of the pile of underground labels making house music for discerning ears. It was only a matter of time before the label took the logical next-step into artist albums and here they are with the debut LP from 6th Borough Project entitled One Night In The Borough. It’s more than likely that you’ve come across 6th Borough releases or edits on labels such as Instruments Of Rapture, Jisco or Permanent Vacation as well as having kick started the whole thing off here at Delusions Of Grandeur with their release The Soul Part II (under the aka Craig Smith & The Revenge). It’s also more than likely you’ve been in some late night establishment whilst The Revenge provided musical accompaniment on his record players seeing as he is one of the most in demand DJ’s playing underground house and disco on the scene right now.

Their debut 6th Borough Project LP gives us a candid glimpse into what it might be like to spend One Night In the Borough – that’s Edinburgh to you and me, home of the military tattoo, Harry Potter and the deepest, disco-infused house and raw underground soul made by two music aficionados/obsessives named Craig and Graeme. From the outset, this LP feels like the coming of age for a project that has been previously focused solely on 12” dancefloor cuts but has now been cut loose and pushed things further to explore and revel in the wider perimeters of the LP format.

Let Yourself Go sets up the vibe perfectly with its echoing chords and dub FX before things slide into loopy beatdown house on If The Feeling’s Right. Next up things go heads down, all out, old school deep house with B.U.R.T (The Journey) which nods to classic Global Communication but keeps the tempo way down creating a super sexed-up groove which positively throbs throughout. Find A Way follows and sees the guys deliver what we know as classic 6th Borough material ie. precision cut edity disco and soul but heavied up with a fat kick and an arrangement which screams out for peaktime plays.

Up next we have Back To Me featuring the vocals of Ricky Reid who drops in just the right amount of hooks on top of a rolling square wave bass, layers of fizzing pads and understated groove. More proof of 6th Boroughs ability to ignite dancefloors follows with The Fool which comes fully loaded with funk and an unbridled energy which peaks with a huge vocal led breakdown that’ll both please and surprise the crowd. Endless Nights conjures up feelings of exactly that, the kind of afterparty tune you can listen time and time again and one which will inject new found energy with heartening chords and the deepest beats.

Iznae hits next with a brilliant wobbling bassline that brings a warehouse feel to proceedings before the groove drops into a brilliant break that Harvey Mason would be proud of. Up next we have Deep C which drops the BPM’s for a beautifully layered deep-as-fook head nodder that builds with little bass hits and echoing stabs all seemingly wrapped up in a haze of delightful opium smoke. Changin’ goes on a classic deep house one before B.U.R.T (Inside) takes over with a slightly darker edge from Detroit stabs and ‘Inside’ spoken word. Finally, Settle winds things down perfectly bringing the LP to a blissed out conclusion laden with spinning dub delays, warped sample hits and vocals drenched in reverb.