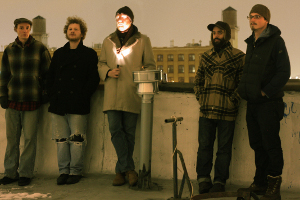 New York quintet O’Death make a stunning return with new single ‘Bugs’, to be released on May 30th via City Slang.

After endless touring on the rollicking one-two punch of their debut ‘Head Home’ and sophomore barnburner ‘Broken Hymns, Limbs and Skin’, the band was sidelined in the midst of their 2009 tour when drummer David Rogers-Berry was diagnosed with Osteosarcoma. Ten months of chemotherapy and a shoulder replacement later, the group returned to the studio with a new outlook on life, and began work on their most fully conceived project to date– an affirmation of sorts.

The band took to the stage at the Newport Folk Festival, performing for the first time in over a year in July 2010 to critical acclaim, not only marking the beginning of O’Death’s comeback, but proving that it was a comeback worth waiting for.

‘Bugs’, the first single to be taken from their forthcoming third album ‘Outside’, is a confident but delicate, folk-inspired track, moulding harmonies and gentle guitar picking.