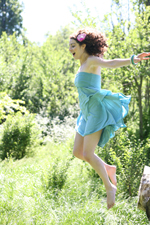 Kaz Simmons will be celebrating the launch of her third album, Dandelions. Currently enjoying airplay from Jamie Cullum and BBC specialist shows. The night will feature all the original songs along with a superb String Quartet and a host of most talented instrumental musicians of the scene today.

Dandelions is an intimate, autobiographical insight into her world where she fuses the Spanish classical guitar music of her youth as well as Brazilian, pop and jazz to create quirky twists and turns.

Kaz and her band will also perform favourites from her critically applauded album Different Smile, which was released in 2007. Joining her on stage will feature some of the UK’s finest young musicians including Ivo Neame, James Allsopp, Fulvio Sigurta, Riaan Vosloo, Tim Giles, backing vocals by the superb Sara Mitra, as well as a string quartet.