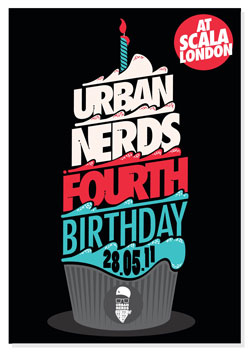 OVER 20 ENORMOUS NAMES IN UK BASS, DUBSTEP, ELECTRO, GARAGE & GRIME CELEBRATE 4 YEARS OF URBAN NERDS AT THEIR BIGGEST EVER PARTY!

Saturday 28th May 2011 marks the Urban Nerds 4th Birthday! One of London’s biggest underground party brands celebrates four years in the game with their biggest ever rave, marked by over 20 enormous acts representing the  finest in underground sounds; dubstep, electro, garage, grime and all things bass heavy, at legendary King’s Cross nightspot, Scala!

MS DYNAMITE heads things up with one of her high-octane live performances! The original UK garage ‘bad gyal’ has grown into one of the most celebrated MCs in the country, with a Mercury Music prize and two Brit Awards under her belt, plus a string of  both underground smashing and chart busting hits, including the recent ‘Lights On’ with Katy B and collaborations with  Magnetic Man, Redlight and DJ Zinc, not forgetting the original, Sticky produced garage banger ‘Booo’!

Returning to Nerds after a jaw-dropping New Year’s Eve set in 2010, DJ EZ remains the biggest DJ in garage, holding down a famed weekly radio show on Kiss 100 for over 10 years and mixing countless platinum selling Pure Garage compilations, with epic 8 hour sets the highlight of his endless gig list. EZ’s skill behind the decks is truly immense, supported by a legendary record collection that we’re sure is set to blow the roof at Urban Nerds in May!

ROSKA is one of the most exciting producers in the UK today after forging his unique energetic sound that gels house, tribal beats, UK funky and bass, characterised by the dancefloor destroyers ‘Squark’, ‘Wonderful Day’ and ‘Love 2 Nite’ taken from his 2010 debut album. His coveted Rinse FM residency, an incendiary Essential Mix for BBC Radio 1 and recent huge link-up with Toddla T make Roska hot property right now and a huge addition to the Nerds 4th Birthday line up!

Having remained at the forefront of the new breed of UK bass culture, REDLIGHT navigates the unnamed airspace between dubstep, house and breakbeats with an ever expanding list of hits that includes ‘What You Talking About’, the massive tune that saw him link-up with fellow Urban Nerds 4th Birthday headliner Ms Dynamite. Affiliations with Shy FX’s Digital Soundboy label and Chase & Status’ MTA Records mean Redlight is only going to get bigger!

This absolutely enormous line-up continues with DOORLY, the multi-faceted Ibiza Rocks and Wax:On resident who’s taken UK bass across the globe, topped off with his forthcoming US tour with Rusko! Highlights of the Doorly journey so far include a huge BBC Radio 1 Essential Mix and the launch of his own label, Pigeonhole This! He’s sent crowds going mad at Urban
Nerds’ warehouse parties before and Saturday 28th May will be no different!

MJ COLE is another DJ and producer at the forefront of underground British dance music. As well as the 1998 era defining single ‘Sincere’, Cole’s responsible for countless heart-wrenching garage productions. Of late, you’ll know MJ Cole for his huge collaborations with Wiley, production for Example plus massive remixes for the likes of Mad Decent and Drop The Lime!

Making his first ever appearance at Urban Nerds, NETSKY flys the flag for drum & bass! The Hospital records soldier from Belgium has risen to the top of the game at record speed, garnering support from scene fathers Hype, Friction, High Contrast and Fabio and winning ‘Best Drum & Bass Producer’ at the Drum & Bass Arena Awards. A combination of epic, uplifting, melodic beats and heavy dancefloor bass have placed Netsky firmly at the top of drum & bass ranks and the Nerds can’t wait to see what he’s made of!

This truly mammoth collective of genre and scene defining artists is accompanied by yet more enormous acts…dubstep stalwart N-TYPE, electro and bass innovator MUMDANCE, Butterz label bosses and leading grime champions ELIJAH & SKILLIAM, fast rising house and dubstep producer MARCO DEL HORNO and infamous Urban Nerds residents and unrivalled bass duo RATTUS RATTUS & KLOSE ONE. Rinse FM’s MARCUS NASTY is on hand with his ridiculous collection of rare UK funky and house beats, whilst the dancehall and ragga infused bass bombs of WARRIOR ONE are set to take the party to a whole new level! RACKNRUIN is fast becoming one of the most sought after producers on the bass circuit and Nerds are over the moon to have him representing his jungle and breaks influenced electronica on the night!

GET LOW are on hand to host room 3! From humble beginnings throwing hectic house parties, Get Low has quickly grown to become a top club night in London and Norwich, at the forefront of bass heavy dance music. In the past they’ve hosted artists such as Skream, Joker, Caspa and Rusko! Urban Nerds are hyped to welcome the crew and their resident DJ squad to Scala
to help see in the big 4! Check out http://www.getlowblog.com

Kicking off in 2007, Urban Nerds were the original purveyors of the bass mash-up and amongst the first to amalgamate the full spectrum of underground sounds under one roof. The party’s moved from strength to strength, taking over some of the most exciting warehouse spaces in the city with mind blowing nights attracting crowds of over 1500 ravers. They’ve invaded world- class clubs Fabric and Matter and collaborated with the likes of Snowbombing festival and the DMC World DJ Championships and brought the bass to a string of festivals, including a debut at Glastonbury in 2010. From day one they’ve pushed some of the biggest DJ talent in the game that includes Rusko, Zinc, Benga, Goldie, Mala, Shy FX, Jack Beats and David Rodigan. The Nerds have also promoted groundbreaking UK vocalists with Tinchy Stryder, Katy B, Professor Green, Skepta, Example and JME all having graced the stage at an Urban Nerds rave!

For more info watch the video below:

Time: 10pm until 6am
Admission: £17.50 in advance. Age 18+
Tickets: Scala box office between 10am and 6pm Mon-Fri for ticket purchase, or link below
Buy tickets online: https://scala-london.ticketabc.com/events/urban-nerds-4th-birt/

Something Beginning With L – Beautiful Ground 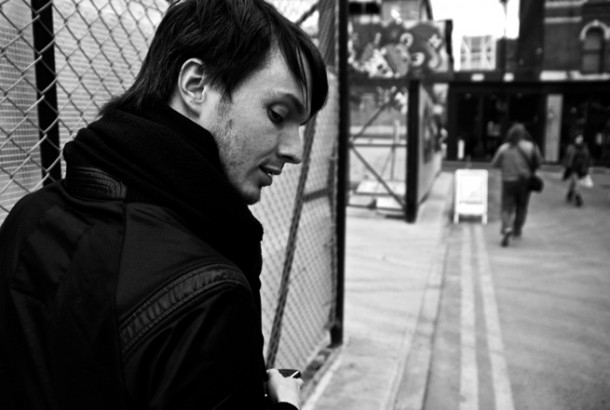