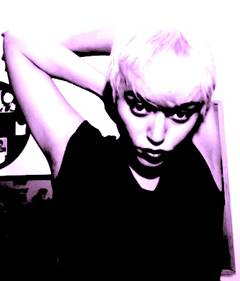 “Much like Laurie Anderson, Danielle Dax, Gang Gang Dance and Rainbow Arabia with an eerie piano/synth and quivering vocal melodies, this performance artist, singer, multi-instrumentalist, whatever you want to call her, always delivers the unexpected…..”

“Ana Lola Roman is a Brooklyn synth-pop gem by way of Oklahoma who frequently pops up in Baltimore and Berlin, leaving a trail of lavishly strange dance performances and videos wherever she travels.”

Ana Lola Roman is a true renaissance woman; she is at once a songstress, a video artist and an incredibly charismatic performer. Her new AA single Jigsaw / Klutch is no less eclectic  combining a dark meditate soundscape with intelligent social commentary that never veers away from being utterly danceable; she sings ‘Men with guns, storming in.

I never really asked for this’. Jigsaw/ Klutch is set for release on the 20th June 2011.

The single was recorded and co-produced in NYC with visionary producer and computer game composer Jean Luc Sinclair (Nine Inch Nails, Scissor Sisters). Jigsawsounds almost tribal as Roman contrasts a hypnotic early nineties riff with a torch song-esque chorus, dissolving into a final emotive cry that prompts reaction or change in the listener, ‘They taped my mouth red’, she sings. She borrows from contemporary classical music and New York minimalism combining a fragile, world-weary almost performance poet tone with the howlings of a later day prophet as she asks us to ‘Go ahead and name your price. And think twice’.

Klutch continues in a similarly intense vein blending Fleetwood Mac-esque guitars with a cinematic piano riff, as her voice churns and chants like a mature Siobhan Fahey.

This is innovative, intelligent pop; and Ana Lola Roman appears as enigmatic as an early Madonna with her slicked down hair and attention grabbing moves.