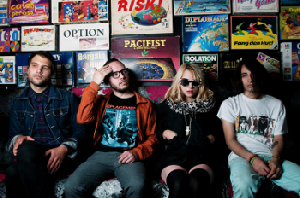 Following an exclusive stream on This is Fake DIY this weekend, you can now download the GWAIIU remix (ex-Chew Lips) of Thomas Tantrum’s new single ‘Hot Hot Summer’ for FREE!
Remixed by Will Sanderson – formerly of electro-pop outfit Chew Lips – this ‘Hot Hot Summer’ remix is his first outing under the new guise of GWAIIU, and it’s a pretty good version, if we do say so ourselves.

Gone is the easy, breezy pop of the original; the GWAIIU remix toys with far darker things. Heavy on the electronics, it boasts big beats and futuristic tones, a far cry from the sounds previously associated with Thomas Tantrum.

You can hear it for yourself here and download:

Hot Hot Summer’ is released on June 5th and their sophomore album, ‘Mad By Moonlight’ which also features the single ‘Sleep’ is out on June 12th.

You can see the video for ‘Hot Hot Summer’ here:

Not only that by the band were on Marc Riley’s show on 6Music last night and performed ‘Sleep’, ‘Face the Music’ & ‘Hot Hot Summer’!

You can hear the session here: https://www.bbc.co.uk/iplayer/episode/b0116lr2/Marc_Riley_Thomas_Tantrum/

Thousands to Tour the UK with Tune-Yards in June