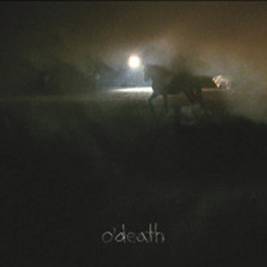 “This raw and ragged New York band draws from the starkness and spiritual purity of Appalachian folk, the menace of punk and the rowdy theatricality of Tom Waits, jumbling sacred and profane.”

“Outside is unclassifiable in the same way records by northern contemporaries Beirut and Man Man are unclassifiable– folk music, it turns out, is a broad and fluid thing.” – Pitchfork

In late July of 2010, New York quintet O’Death – Singer/guitarist Greg Jamie, Gabe Darling on banjo and ukelele, drummer David Rogers-Berry, bassist Jesse Newman, and violinist Robert Pycior – returned to the stage after a year-long hiatus to play a critically-acclaimed set at the Newport Folk Festival. In many ways it was the perfect start to a new era in the band’s existence, and a logical precursor to their upcoming third LP, ‘Outside’. ‘Outside’ is released on June 6th 2011through City Slang.

After endless touring on the rollicking one-two punch of their debut Head Home and sophomore barnburner ‘Broken Hymns, Limbs and Skin’, the band was sidelined in the midst of their 2009 tour when Rogers-Berry was diagnosed with Osteosarcoma. Ten months of chemotherapy and a shoulder replacement later, the group returned to the studio with a new outlook on life, and began work on their most fully conceived project to date– an affirmation of sorts.

In the past, O’Death has been most visible via their chaotic live shows, but the band was determined to add more depth to their catalog.

“I think we were interested in making something more personal, and trying to write songs that are melodically engaging and not just the crazed ravings of mad men,”says Rogers-Berry of the process behind ‘Outside.’

Jamie continues, “None of these songs were played live before recording, which is a first for us. I think that’s important to why the album sounds the way it does. We gave ourselves the chance to explore sound in a way that is not concerned with a high-energy live show.”

The result is a record that lives up to its name with spacious and cinematic arrangements, layers of subtle percussion, and at times an impenetrable wall of found sound. O’Death recorded the album over a two-month period, easily the longest they’ve ever spent on a production. Producer/Engineer Billy Pavone, who was also behind the board for ‘Head Home’, came along for the ride.

The extended recording time allowed the band to write in studio, as well as cultivate the organic noise for the record in an intimate setting. As Pavone observed,“Creating the album in the recording, and not in the mix, was a leap of faith for me. It was challenging to let go and allow the album to breathe a bit, and be its own creation – unique and very different from some of the sounds we hear so often in the world of digital manipulation.”

The result is a record that is both the most subtle and massive accomplishment of the band’s career, a darkly triumphant and free-flowing album that represents exactly where the songwriters have found themselves in this moment. As Pycior notes, “I love the dynamic disparity in the album: the fragile parts of ‘Bugs,’ ‘Ourselves,’ and ‘Don’t Come Back…,’ the huge endings in ‘Alamar,’ ‘Look at the Sun,’ and ‘Pushing Out.’ I know we have the right sequence this time around… and I love ending on a different and demented tone with ‘The Lake Departed.’”

You can download their new single ‘Bugs’ for free here:

and see the video here: