Owen Franklin ‘Portrait Of The Young Man As An Artist’ 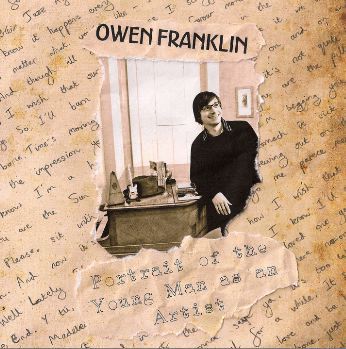 The culmination of a year’s experimentation with song writing, Owen Franklin’s new album salutes artists such as Springsteen, Dylan and Joel with modern, jazz-flecked twists. Recorded in various studios, sheds and garages, ”Portrait Of The Young Man As An Artist’ is the promising sound of a fresh-faced musician cutting his teeth, and offering his own quirky take on what it means to be a contemporary songwriter. Themes of love, loss, hope and friendship are all explored with a generous dosage of playful irony and self-deprecating humour.

‘ The Not-So-Great Gatsby ‘ is the first single from the debut album by Owen Franklin, a fresh faced 19 year old song smith and musician of some ability, playing guitar, drums, and piano , as well as singing on many of his tracks.
The single takes the rough story of ‘The Great Gatsby’ and turns it on its head, with the song’s narrator realising that the object of his affection isn’t worth it. Despite the somewhat furious lyrics in places, it is meant to be light-hearted and ironic, and comes with a very funny do it yourself style video:

Technically his 2nd album after an initial demo release in 2010, “Portrait…” (Due in July 2011) is a collection of 11 songs from Owen’s first year of exploring song writing. The music appreciatively alludes to Bruce Springsteen, Bob Dylan, and Billy Joel, and the more traditional portrayal of the ‘classic songwriter’ whilst retaining a more modern, quirky Indie sensibility. Themes of love, loss, hope and friendship are all explored with a generous dosage of playful irony and self-deprecating humour to counterbalance the poignancy. The album has two halves with differing lyrical ideas – the first half one of confusion and uncertainty, the second of hope and realisation.
” I write all of my music and lyrics myself unless otherwise noted; I’m fortunate to know a number of exceptionally talented musicians and call them friends, so I get to work with a host of great people when recording my songs. I play piano and sing on just about all of my tracks, and I’m currently putting together a live band with the hope of gigging over the summer of 2011.” –  Owen

1. The Lovers & The Losers feat Kleve
2. She Walks In Beauty
3. Teetotal
4. The Tempest (Part One)
5. Misanthropic Blues (Live Take)
6. Halfway House To Hell
7. A Celebration Of Songwriting
8. The Only Thing Left To Do
9. The Not-So-Great Gatsby
10. Last Orders
11. Thats What Friends Are For

Delooze – We Are Transient