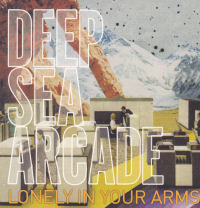 With their debut UK single “Lonely in Your Arms” Deep Sea Arcade have managed to avoid the pitfall of many bands – adding too many elements to a song which results in clichés or complete overkill. The Sydney based five-piece held back in the production and the result is a pared down, retro surf-rock song that simply works. It is a perfect summer tune.

There is an obvious 60’s influence in this song, lead singer Nic McKenzie’s vocals are reminiscent of a young John Lennon when he wistfully sings “I could be lonely, I could be lonely in your arms” in the chorus. However, don’t write Deep Sea Arcade off as another corny throwback band, their sound  has a modern twist with surf-rock guitar riffs and even some 80s style synth in the mix.