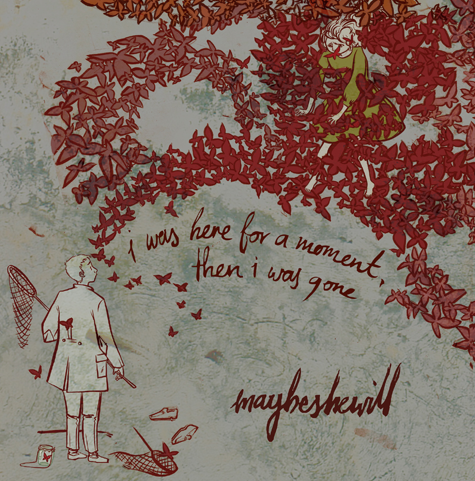 There’s something intrinsically fascinating about Maybeshewill’s ‘I Was Here For A Moment, Then I Was Gone’, but exactly what it is eludes my vocabulary. To call their brand of instrumental ear-openers “post rock”, as many might, would miss the point. Their music doesn’t descend from on high, but bleeds from the souls of human musicians.

This album, for the most part, feels like the evocative, occasionally melodramatic, soundtrack to one of the best films you’ve never seen. ‘Opening’ is a sweetly eerie track driven by a tinkling piano riff, beefed up by cavernous drums and a lyrical string section as it lifts from the small-scale to the expansive. The sublime ‘Red Paper Lanterns’ feels like its spiritual twin, blending a lilting guitar, understated bass, and shimmering glockenspiel from hushed beginnings to a bright burst of melodies, propelled by pounding cymbals and some deftly executed keyboards, turning from ethereal rock to pounding atmosphere and ending up pouring electronic heart into a beautiful final few minutes.

However, sandwiched between these is the four-minute jackhammer excitement of ‘Take This To Heart’, what might happen if A Place To Bury Strangers lost their effects pedals and gained half an orchestra, if that makes sense. Fluctuating between a savage rock bite and tense atmospherics, there’s a palpable menace in crisp percussion and the howling guitar/keyboards assault that leaps from the speakers, but it is tempered by the lush string sections and introspective classical piano. Similar tones can be found on ‘Accolades’ as a borderline metallic rock opening with crunching guitars and Beethoven-esque keyboard loops give way to the fascinating lovechild of heavy metal groove and Mogwai atmospherics. Moments of gossamer-soft melody are held together by the booming rhythm section and thick guitar squall, which lurches on the borders of lunatic “math rock” (think Chickenhawk/Hawk Eyes) territory in its fury before it fades back to beauty.

Sprightly keyboards illuminate the slight melancholia on ‘Critical Distance’, as acoustic blends with electronic to create a rewarding tapestry of romantic melody, and a light/dark contrast as booming drumkit and tender piano flow alongside what is nearly a dance beat and hazy, echoing synths that feel like Explosions In The Sky if they ever remembered to enjoy themselves. ‘An End To Camaraderie’ brings, with its sprawling, epic strings and its breathtakingly emotive sounds, a real sense of catharsis to the fore, as it builds and builds to an incredible climax reminiscent of that immortal 28 Days Later soundtrack moment ‘In A Heartbeat’. Afterwards, ‘Words For Arabella’ ushers in mournful brass and elegiac violins to cool the mood suitably, without losing the album’s thread.

Penultimate track ‘Relative Minors’ brings it all down to sparseness before building a veil of tender sound over music box tinkling, before hammering hot blood and tears into the listener’s heart with urgent guitars and breathless keyboards. Listening to it, there’s a feeling that it might be cutting into your soul’s old wounds, but something about it keeps you captive, as its attacks fade into moments of exhausted beauty.

Finally, ‘To The Skies From A Hillside’ wraps it all up, both fluidly charming in its melodic expressiveness, and borderline scary in its sudden, doomy heavy metal turns and math rock style guitar picking. Hints of The Mars Volta lurk at the fringes of this track, as it fluctuates from eloquent piano to pure distorted-guitar malignance and back again without so much as blinking.

So there you have it: Maybeshewill, the instrumental band for people who aren’t ashamed to admit they are human. Exciting yet with a full artistic and cinematic scope, you might find yourself lost at times, or even pained by its uncompromising drive, but ‘I Was Here For A Moment, Then I Was Gone’ will hold you from start to finish, and isn’t that what an album is for?