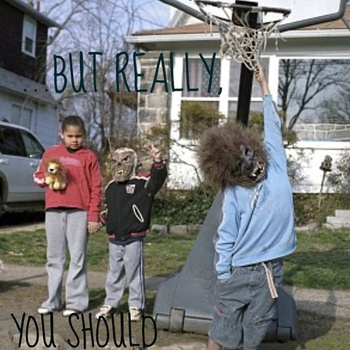 How do you go about creating an innovative spin on a strongly rooted sound? Robot House are hot on the heels of the 90s fetish a lot of modern rock bands are sporting on their flannel sleeves, but they’ve taken the American sludgy punk of two decades ago, and on their lengthily-titled EP ‘I Would Introduce Myself But Really You Should Know Me By Now’ (hereby retitled ‘Introduce’ for convenience) given it a sinister shot of twisted British attitude and a spit-polish of something… other.
We start with the frenetic buildup of ‘I’d Love To See You Fall’. A manic, off-kilter rock drumbeat that seems to be coming from several directions (and percussionists) lends a boot up the dense guitar strumming, and a fevered vocal delivery quickly ramps from tense growls to a full-blooded yowl of rage as the instruments reach a cymbal-driven fever pitch reminiscent of ‘Bleach’. Careering behind is the bleakly metallic punk of ‘German Suplex’. The riffing is heavy and sounds like a concrete buzzsaw, the verses driven by fuzzed-out downtuning and taut hi-hat skitters, alongside some savage lyrics and ominous vocal delivery. The chorus never quite bursts into life as it should, but the track as a whole delivers a Jaws theme tension like a note wrapped around a brick missile of deliciously twisted rocking out that sounds like the lovechild of The Pixies’ sound and Future Of The Left’s um, being Future Of The Left. Surreal, hard, and simultaneously fascinating and faintly disturbing.

However, Robot House aren’t entirely frustrated punk on a stormy day. ‘Gaps’ is a fragile six-minute alt-rock eulogy to companionship that echoes earlier Brand New. It is hard to create a slow, tender moment nestled in angst without it jarring, but there’s something about the brittle guitar sound and the startlingly open lyricism that reaches a pleading hand behind the eardrums to strum the heartstrings. Barely an acoustic strum in sight, yet perhaps because it is a slice of all-too-prurient reality in the nightmare images of earlier, this is a real piece of rock poetry.

Unfortunately, ‘Neck High And Rising’ doesn’t quite manage to neatly tie up the promising threads of earlier, being a little too indie-pop for its own good. There’s a good idea in its marriage of the dreamlike squalls of a shoegaze heritage and the chugging pseudo-Britrock sunshine that props up the ethereal fringes, but somehow it doesn’t feel quite as finished as its predecessors, coming across as a confused blend of several songs, even if the accomplished yet stripped-down musicianship is arguably at its pinnacle.

‘Introduce’ is an uneven creature, a sort of Frankenstein’s monster lite – if you will – of various influences patched together in a way that is almost there, but falls short, albeit thankfully without destroying its creators. Robot House have given four songs of distinct potential, and the promise of what could, given some time and effort, be a force of high calibre and quite possibly another contending frontrunner in what I hope is a potential rock revolution in the UK as bands like Max Raptor and To The Bones, with a similar mix of dark intellect and heavy sonic thrust, are setting alight a new torch to light up uncertain times.

The comeback of Pulp fulfilled all expectations @ Primavera Sound!