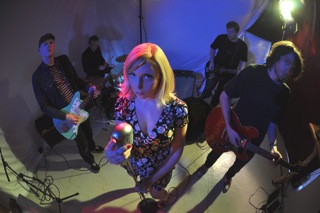 Deep Cut are set to release their new album ‘Disorientation’ on 5th September through Club AC30 Records. (Home to Ringo Deathstarr, Exit Calm, The Megaphonic Thrift).
Across the 12 tracks the ghosts of classic songwriters like The Byrds and Love collide with the noise sensibilities of The Jesus and Mary Chain and Sonic Youth with room remaining for the wildcard likes of Augustus Pablo, Husker Du, Neu, classic East Coast hip hop, late 60’s American psych and floor shaking dub to make their presence felt. Trainspotters will be impressed to hear that ‘Out Of Nothing’ is built around a beat taken from (and credited to) cult NYC producer Godfather Don.
As with their debut ‘My Thoughts Light Fires’, Deep Cut produced ‘Disorientation’ within the band, recordings taking place in their rehearsal space with overdubs happening in Mat and Emma’s front room. They also create all the visuals that will accompany the album with a little help from Mat’s father, once a designer for the likes of Smash Hits and Zigzag magazine and perhaps the reason why the young Mat Flint became so obsessed with music. Mat said:
‘This is all about being creative and making music that resonates with us and others rather than chasing some elusive notion of fame. It’s about making music that we are proud of rather than something that fits into a scene.’
Deep Cut’s album ‘Disorientation’ will be preceded by single ‘Something’s Got To Give’ on 8th August.

Listen to the first track to leak from the album ‘About Face’ HERE: http://soundcloud.com/charmfactory/deep-cut-about-face/s-EX5et