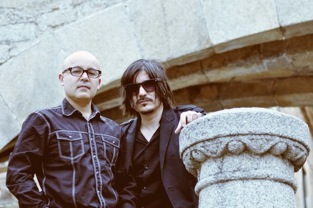 Bostich & Fussible, one half of Nortec Collective, Mexico’s groundbreaking Tijuana-based genre-alchemists, return with their Grammy nominated release ‘Bulevar 2000’ released on the 25th July through Because Music. Bostich & Fussible will be appearing at this summer’s Lucha Future shows here in the UK; a marvel of live performance and a show like no other. Good takes on evil, heroes are born and super heroes are made in a night of adrenalin fuelled Mexican wrestling. In conjunction with Lucha Future, Bostrich & Fussible are offering a free download of their track ‘Punta Banda’.

The album features collaborations with local Mexican musicians as well as the Argentinean conductor Alberto Nunez Palacio renowned for his work with the great tango-fusionist Astor Piazzolla. Nunez Palacio wrote string and horn arrangements on ‘I Count The Ways’ and ‘Bulevar 2000’ after performing with Bostich & Fussible in front of 25,000 fans in the streets of Tijuana. The show, a landmark event for the band, was held to celebrate 10 years of the Nortec Collective.

LUCY WARD the debut album Adelphi Has To Fly