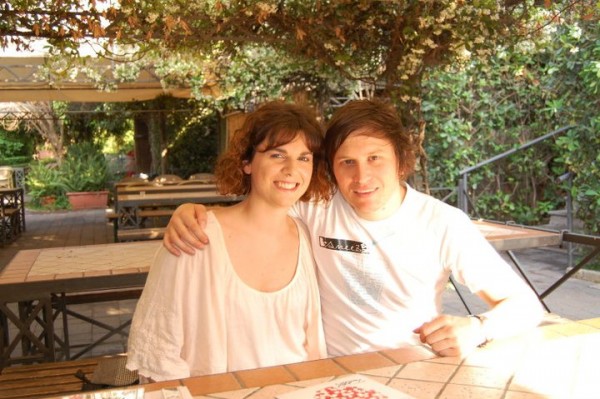 AAAMusic had the pleasure to chat before the show with Tord Overland Knudsen from The Wombats in the beautiful gardens of Circolo degli Artisti. We talked about the new album, the love for synths and the city of Tokyo…

AAAMusic: “This Modern Glitch” is quite different compared to “A Guide to Love, Loss and Desperation”, its mood is darker and lyrics refer to past and present life experiences, did you use music to relief from your problems?

Tord Overland Knudsen: Yes, I think music is therapeutic, it is a good therapy to make music to get problem out of the system and to forget about them. You take stories from real life and events and they can be slightly exaggerated but they are photographs of your life.

AAAMusic: So who wrote lyrics?

Tord: Murph wrote most of the lyrics, we all work the music together along, it’s like you have a skeleton of a song, and then we add the guitar , maybe the chorus…

AAAMusic: I really like when you play the cello…

Tord:Yes, I have been playing cello since I was a little boy and I never used it in the context of The Wombats, this is the first time, we were starting to record Jump into the Fog acoustic and it’s funny bringing something from the past into something faster.

AAAMusic: So are you gonna play something acoustic tonight?

AAAMusic: Tokyo (Vampires and Wolves) appears to be a metaphor for escaping the star system, in fact you poke fun at stars in its video, why did you choose Tokyo among all other cities?

Tord: Because the first time we went to Japan was a massive total shock, we had such a good time, it was a happy place… I guess when we were working on this new album, we were pressured from the label, pressured to create something better than what we did on the first album, we had to make it better than Let’s dance to Joy Divison, so Tokyo reminded us of a happy place during the album making and we created big songs that probably are better than Let’s Dance to Joy Divison.

AAAMusic: About Joy Division, you mentioned them in the title of the song in the first album and I think they come back in This Modern Glitch in a sort of like, what do you think of them?

Tord: Yes, actually I think lyrics and music fit better together in the last album, the music is .. you know there are moment of happiness but in general it’s a bit darker, a little bit colder, actually I think the music is more New Order than Joy Division, yeah it’s more 80s influenced in sounds we are using, but we never try or wanted the album to be New Order, Depeche Mode, there are all this things, you know we listened to Kraftwerk, so we used the synths…

AAAMusic: How did you choose to use synths so massively, is it because you were listening to Kraftwerk?

Tord: No, it was because we were a bit bored I think. We can all play different instruments, I can play bass, cello, guitar, piano and the same do the band, we all play different things, it’s to keep yourself amused and interested. You know it’s boring to play only always guitar, you want to do something different. So we got few synths in a room and started playing one. “Our Perfect Disease” is the first song that was a kind of synthian, so synth influenced, we were really excited about it, so somehow we keep on mixing synths with guitars, and we go back and forth playing guitar and synth I think in all the songs…

Tord: Yes some of the songs of this album are the hardest to play, for example Dan plays drums, then he rolls to play keyboards at the same time, it’s crazy, a kind of multitasking, it keeps in fashioning the work of musician so it’s funny.

AAAMusic: What kind of synth do you prefer? For example I saw that you use the Microkorg…

Tord: Yes, we love to use it a lot in the recording process, what we are using now onstage are to sample moog, because in studio we used a lot of moogs, Juno, all the vintage synth…

Tord: Yeah, it’s like all the old school synths, and we use samples in order to get similar sounds to those we have on the record, it was a long process, geeking about  and making the work both in the studio and live.

AAAMusic: Your first singles are supported by beautiful videos, original and coherent with the song concept, did you contribute to writing their scripts?

Tord: We get some treatments from different directors and we said “yeah we like this one,  it would be cool to find this and this one, we have some sort of like, you have to say I don’t like it sometimes , but most of the ideas were made by the director…

AAAMusic:…ok, because Tokyo, for example, has an atmosphere a la “Lost in Translation”…

Tord:…yeah we ask the director to think of “Lost in Translation” in the treatment.

AAAMusic: Which is the worst part of being a musician?

Tord: I think it’s the same as the good part of being in a band, you know you get to travel the world together and you are constantly the person in the band just being in the band, being on stage, you know I’m Tord from The Wombats 24/7 especially when you go on tour, so it’s just like you snap out of the band life and get back to your home, so it’s like your life follows you everywhere, so I think this the good thing of being in a band and the bad thing, because it’s bad if can’t snap out of that, because it’s too much.

AAAMusic: Are you or Murph (who wrote the song) techno fans?

Tord: Not really, I think he’s more amused by this techno night he went to with his girlfriend, it was so different that he enjoyed it, it’s not about techno, but I think again it’s more about escaping.

AAAMusic: Which is your favourite music style?

Tord:  I’m so eclectic, I can listen to hardcore, but I can listen to classic music, jazz, electronic music, apart from all the obvious stuff, I love things written in 90s, when I was a kid, like Weezer, Smashing Pumpikins, 90s are a sort of my favorite decade.

Between all these things we don’t listen to indie music, we don’t really like it, we listen to something more melodic, more singing songwriters, weird things we actually sound like. You know people think “You should listen to The Strokes”, but actually we prefer things like The Smiths or Pixies.

AAAMusic: You’re from Liverpool, so what about the Beatles?

AAAMusic: Murph wrote Anti-D and recent research shows that youth depression has been increasing as of late. Why is this happening in your opinion?

Tord: I don’t know why people suffer depression, yeah maybe because of modern life, I think the answer is in the title of the album “This Modern Glitch”, the glitches are in your life or in your head, people get harder and harder and they are less careful to the growing up of this haste.That’s what I think, I’m sure there are different answers for different people.

AAAMusic: Which is your favourite song of the album?

Tord: I like all the songs equally, the song of the album we are most proud of  is “Techno Fan”, because it’s the only song that we record ourselves, we produced it.

The time ran out so we have to say goodbye to Tord and wait for the show!
Authors & Photos: Roberta Capuano & Luca Cirillo