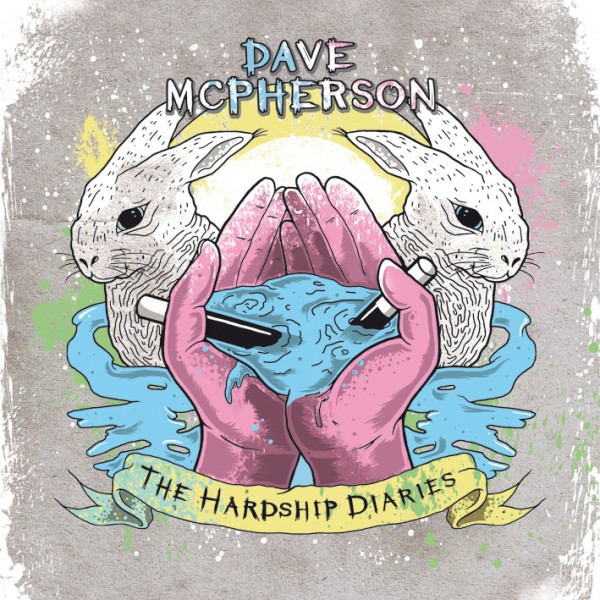 Dave McPherson’s solo album sounds pretty much exactly how you expected it to sound. But, it also sounds pretty much exactly how you wanted it to sound. There’s a real trend for metal/punk frontmen recording and releasing acoustic solo albums, and ‘The Hardship Diaries’ is the InMe singer/guitarist’s attempt to unveil his softer side. Some alternative singer-guitarists make this transition with ease, such as Dallas Green from Alexisonfire with his solo outfit City And Color, and many can achieve a greater level of fame, as with Frank Turner. And, of course, nobody did it better than Elliott Smith, who become an iconic singer-songwriter after leaving Heatmiser. However, some can end up sounding tacky, as with Fightstar’s Charlie Simpson and his recent acoustic misfires.

I’m happy to report that Dave McPherson is no Charlie Simpson. But nor is he City and Color or Frank Turner. ‘The Hardship Diaries’ is a collection of solid, pop-folk tunes, but there is nothing truly spectacular here. It was never the intention, however, for McPherson to push boundaries and launch some kind of revolutionary solo career. This is just a showcase of what Dave has been up to in between InMe’s studio recordings and tours. And it is a fine selection of acoustic numbers, with inventive guitar parts, memorable choruses, and a few cheap segments of unnecessary strings.

The album is loosely connected by four songs about the seasons, the best of which is the upbeat single ‘Summer She Puts Me In A Good Mood’ and the worst of which is the underwhelming ‘Autumn A Ghostly Reprise.’ The understated ‘Spring Hearts Need Blood’ and ‘Winter Hibernation’ bookend the album perfectly, with the closer being a quiet highlight. The lively ‘Before I Even Had You’ boasts one of the catchiest choruses, and ‘Is This All We Are’ contains some of the most intricate and accomplished fingerpicking on the album.

As with InMe’s songwriting – which, like with these pop-folk songs, is consistently intelligent – the most important weapon has always been Dave’s captivating voice. He has a truly distinctive voice and commendable range, and it is this voice – sounding more passionate than ever, thanks to the stripped back production – that marks this album out as a worthwhile purchase.  I urge you to go and see Dave McPherson live – let’s give this underappreciated musician some much-deserved support.