Tellison – The Wages Of Fear 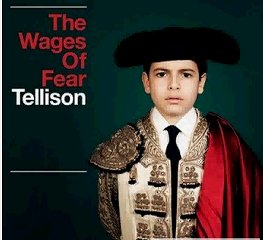 Right from the off, Tellison’s ‘Wages Of Fear’ feels like I’m listening to Motion City Soundtrack. On the one hand, great – we’ve got a set of glossy pop-punk gems that have enough crunch in their sugar coating to justify that amount of saccharine slickness and sweet melodies. On the other hand… reminding someone of another band a few seconds into the opening track, and continuing to do so for an entire LP may show consistency, but also hints at a lack of having independent legs to stand on.

Opener ‘Get On’ sounds like the long-lost twin of the aforementioned pop-punk outfit’s ‘Let’s Get Fucked Up And Die’, with smoothly emotive and sunshine-drenched vocals, and a bouncy little chugging guitar hook holding interest over the teen angst. There’s a wry sense of humour amid the gloom, and the chorus catchy as hell, but it’s too dogged by its own influences to capture. And least ‘Say Silence’ has a bit of kick to it as it pounces upon the listener with a sudden start, the steady percussion tumbling in a satisfying manner, even if the harsher guitar tones and prominent bass jar with the glossy vocal delivery.

‘Know Thy Force’ serves a bit of refreshment from the similarity, adding a jangling Brit-rock spin in the simple yet effective riffs, and a tender, introspective approach lyrically, albeit one that bursts into a stadium-ready chorus. The loping drumbeat is appealing, even if the fills feel show-offy, and the structure of the song feels trite. As for the soft balladry of ‘Freud Links The Teeth And The Heart’, I want to like it, I really do, and I admire the way the band push down their pop/stadium approach to favour a stripped-down moment of hushed emotion, but it just doesn’t stand out. ‘Collarbone’ has a bassier, deeper sound than earlier cuts, but it keeps the irritating angsty sentimentality and squeaky-clean temper. Tiny hints of Alkaline Trio (leaving me wondering if there’s a nod to ‘Clavicle’ afoot) and Arctic Monkeys can be glimpsed, but it all feels a little anodyne. As for ‘Letters’, the attempted edginess simply feels awkward.

‘Horses’ is possibly the first real moment of attention-grabbing songwriting. Yes, it sounds like Motion City Soundtrack again, but in a good way. Tellison finally have managed to reconcile the slick pop production with wry wordplay and a sense of urgency, rather than simply smiling with guitars and sullen undertones. There’s a throbbing sonic undercurrent to a strong little pop-punk puncher with snappy chorus and attitude to spare, and a more serious dimension to the vocal delivery. Too bad it’s chased by the Coldplay-for-the-misunderstood ‘Rapture’, a song so wet it leaves a puddle under the speakers. ‘Tell It To Thebes’ redeems this slowing-down, bringing in a sombre tone that adds shade and depth to the proceedings, a bass-driven throb and heartbroken bitterness blending with sparse yet echoing percussion, a resentful ‘Dookie’-era Green Day with less punk rocking-out and a bit more general 90s alt-rock, if you’d like.

After a couple of unremarkable tracks, ‘Edith’ gives us a bittersweet punch to temper the monotony. The forceful stomping drums and textural play between deep bass and jangling guitar melody is undeniably satisfying, with a chorus that is the musical equivalent of those super-sour sweets. Sadly, ‘My Wife’s Grave Is In Paris’ once again fails to deliver, being a little too limp to really justify its own vitriol, with cliché ballad tones all over the shop.

In the end, Tellison aren’t bad. ‘The Wages Of Fear’ has some decent tricks up its sleeve, but in the end, the sound is a little too derivative, and fails to build up enough steam on its own accord, and I could name-check several bands that do the whole rain on my parade stick much better.