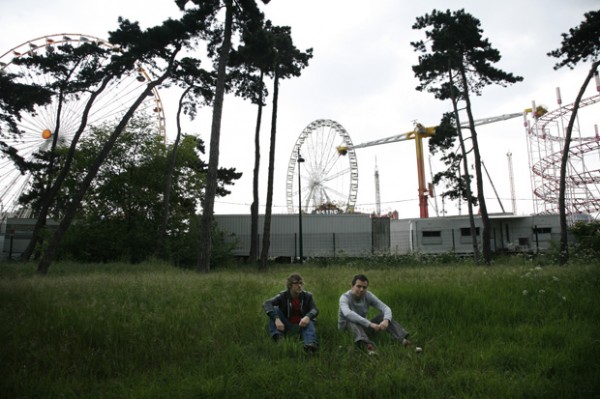 Austerlitz are a three-piece electro-indie / art-punk band from Paris. Virtuosic keyboard lines, intricate bass work, a typically French vocal irreverence that moves from the soft through strident and soaring to sporadic bayings of raw emotion all combine to create a devastating and freely intelligent alternative from our brothers across la Manche.

Austerlitz’s eleven tracks are propelled by a simple engine. Powerhouse drums, deft bass lines and lead singer Gil Charvet’s distinctive vocal delivery. Opener Walking Into The Fire combines the above with the most hypnotic of 5/4 keyboard hooks, a fistful of key changes and the kind of pupil-dilating chorus others would surely covet.

The band’s manifesto reads: “Man is asymmetrical, nature is asymmetrical, this century will be asymmetrical and so will its music…Forget about the bar lines and escape, it’s more than a creed or a mission, it’s a duty.” And there’s definitely a commitment to pushing boundaries on Austerlitz that manages to err on the side of innovation for the sake of the work rather than innovation for innovation’s sake. From cerebral time signatures, myriad key changes and angular, almost faltering drums to the subject matter of songs like Rotten Ears: “I know it’s not your fault, You were probably born with it, And maybe your parents were just got the same, And you’re doing well by the way, Do what you can, It’s not your fault, If you have rotten ears”, Austerlitz’s self-awareness and commitment to development casts them as a French alternative, if not musically, to the almost military organisation of so many of Britain’s punk forefathers.

Lyrically Charvet’s adoptive English manages to convey the same sense of pathos and urgency Phoenix’s Thomas Mars does so well. Behind a seeming simplicity there hide the kind of evocative abstractions and word choices that simply wouldn’t occur to a native English-speaker. It actually works quite brilliantly and Charvet’s vocals easily match the incredibly high level of musicianship on Austerlitz blow for blow, the almost synthetically smooth vocal production meanwhile glues the often asymmetrical, angular whole together.

Austerlitz charts a definite and nearly classical progression in its make up: from an opening exposition of Austerlitz’s sonic arsenal making use of complex instrumentation which then drops out through the record’s central portion allowing the three-piece to rock in an angular and occasionally discordant way that’s always impressive. As the album develops the sonic sphere spreads out again, keyboards and synths return alongside electronic drum samples whilst a developing production takes hold of the Austerlitz blueprint and pushes it and pushes it into something quite new.

In Austerlitz’ own words: “A wave of rebellion must wreak havoc on the rock scene: it must become wild again so it can emerge from this era of glaciation and formulae”. Make of that what you will.