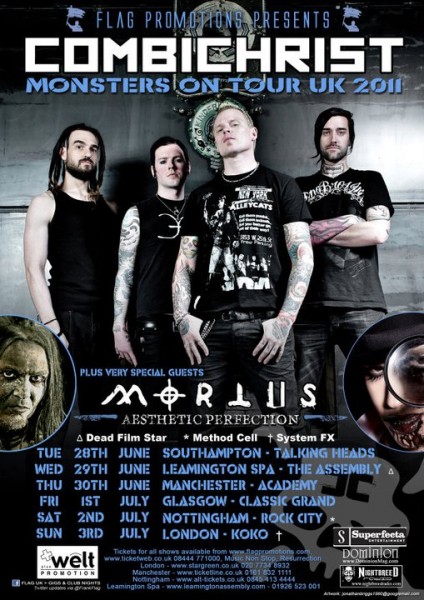 Industrial Superstars COMBICHRIST will be returning to the UK in June/July, supported by Dark Rockers
Mortiis on a run of 6 headline shows.

The dates of the ‘Monsters On Tour’ UK edition are as follows:

28.06 Southampton (UK), Talking heads
29.06 Leamington Spa (UK), The Assembly
30.06 Manchester (UK), Academy
01.07 Glasgow (UK), Classic Grand
02 .07 Nottingham (UK), Rock City
03.07 London (UK), Koko
Tickets are available from the usual outlets:
Southampton | Lemington Spa | Manchester | Nottingham | London only
http://eee-uk.net/eeetickets/advanced_search_result.php?keywords=COMBICHRIST
Glasgow – www.ticketweb.co.uk 08444 771000
COMBICHRIST who are currently tearing up European stages to promote their critically acclaimed “Making
Monsters” album which was released at end of Summer last year – have recently been confirmed as direct
support for all RAMMSTEIN shows on their upcoming US tour in May.
Showing that nothing stops COMBICHRIST’s creative flow, not even being on the road,
the band squeezed in time to remix a track for Tampa Death Metal pioneers MORBID ANGEL that will appear
on the b-side of their new 7″ vinyl single “Nevermore” out on May 16th.
COMBICHRIST are no strangers to musical cross over, front devil Andy LaPlegua used to be in the Norwegian
Hardcore Band LASH OUT, and has only recently formed High Octane Rock N Roll act SCANDINAVIAN
COCK.