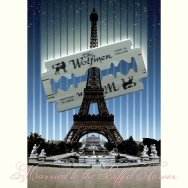 The Wolfmen, formed of Marco Pirroni and Chris Constantinou, are performing a very rare live gig and hosting a launch party for their upcoming album – Married to the Eiffel Tower – on Thursday 14 July 2011 at The 100 Club.

Married to the Eiffel Tower includes the Wolfmen’s duet withSinéad O’Connor, Jackie, is it my Birthday?, which won massive radio support from the likes of Dermot O’Leary (BBC Radio 2),Don Letts (BBC 6Music) and Lauren Laverne.

It also features a cover of a long lost unreleased Velvet Underground song, I’m Not A Young Man Anymore, which has been granted an official seal of approval from Lou Reed.

Married to the Eiffel Tower is out on 18 July 2011, was produced by Courtney Talylor-Taylor (Dandy Warhols) and is heralded by Rolling Stone as “rock rage wrapped in an ethereal halo.”

At the 100 Club, the band will be joined on stage by special guests including ex-Long Blondes Kate Jackson. Support comes from London art-rockers Silvery.

The Wolfmen are set to release their new album ‘Married to the Eiffel Towe... 5 July 2011 | aaamusic