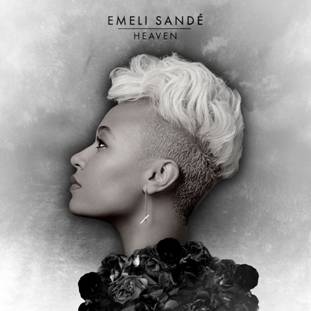 ‘Emeli is not the next so and so, she’s the person other acts will be compared to in the coming years’ i-D Magazine

Virgin Records are proud to announce the highly anticipated debut single by Emeli Sandé, entitled ‘Heaven’, the track is released on August 15th. Not many people know it, but Emeli Sandé was behind some of the biggest tracks of 2010. Now she’s about to be the voice and song-writing talent in front of the freshest debut single of 2011. As someone who sweats the art of song writing as much as the singing, she knows it’s about being contemporary and timeless. ‘Heaven’ is both those things, a euphoric feel good summer track packed with lavish strings, bombastic horns and trip hop beats all combined with Emeli’s subtle yet soaring vocal.

With her shaved head and Frida Kahlo tattoo, the 24 year old Aberdonian chart star has collaborated with some of the greatest names in modern pop and scored two top 10 hits: grime Godfather, Wiley’s ‘Never Be Your Woman’ and Chipmunk’s ‘Diamond Rings’, which she also co-wrote. A piano player since the age of 11, the multi-instrumentalist’s revered writing talents and incredible voice have also led to her co-writing/ featuring on tracks with Tinie Tempah (Let Go), Professor Green (Kids That Love To Dance) and Tinchy Stryder (Let It Rain).

Richly melodic, classically powerful and retro-futurist, the deferred medical student’s (specialising in neurology) own songs are as interesting and as individualistic as she is. Her intuitive intelligence, self awareness, and empowered honesty is hugely apparent in her lyrics. Emeli’s love for and understanding of artists like Nina Simone, Joni Mitchell, Roberta Flack and Lauryn Hill are obvious, loud and proud.

‘I can still relate to a Joni song, even though it’s 25 years old’ says Sandé. ‘That’s the main and important thing to me. I’m not too bothered about my music fitting in to a particular category. There’s no point in limiting who you can reach. But I want to be respected.’

The artist’s artist, her peers already do and it’s not hard to see why. Smart, sussed, talented, entrepreneurial, shiningly engaging in the flesh, utterly transfixing on stage and unforgettable in her words and melodies, Emeli Sandé is the epitome of the brilliant modern artist.

Emeli has been confirmed as the only support for Alicia Keys on 13th June at the Royal Albert Hall. She will also be performing at the following UK festivals:

New Video from Get People