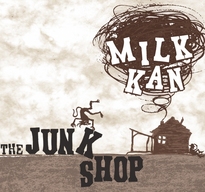 Milk Kan’s second album is a mixture of everything you love about the duo, whether that be the bizarre mixture of trumpets and rap or the combination of old-style hip-hop enthused with punk overtones.  With Milk Kan releasing their first full length LP since January 2009, expectations couldn’t be higher for the group.

Although the whole album is far from perfect, the eclectic sound Milk Kan generates shines through on songs like Lego, which merges soft-styled rap vocals alongside a backing melodic keyboard.  Other songs do fail to create the right sort of sound though, with their single Junkshop standing out as one of the disappointments on an impressive album.

With Milk Kan having already received endorsements from DJ Huw Stephens as well as having a small number of festival performances under their belt, they are a band definitely going places.  Although part of the duo’s strength is their ability to mash-up their sound and create bizarre yet whimsical mixes, they need to both refine and define their sound and achieve some consistency with their sound to push on into the higher echelons of the musical world.