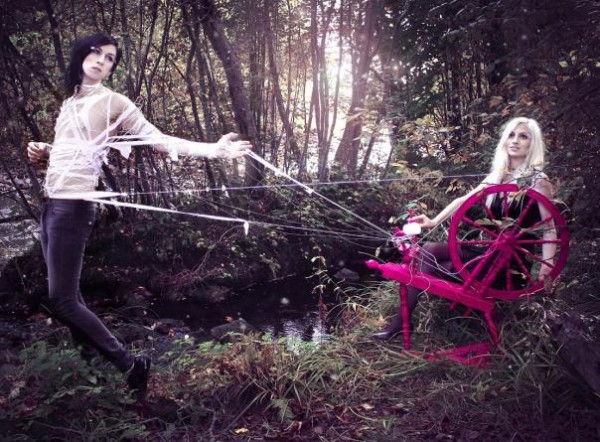 “Beautiful and ethereal songs that are epic in both scope and, occasionally, length” The Fly

“Their ghostly boy-girl vocals and blissful, dream-pop arrangement create a haunting landscape, while the sense of something sinister lurking underneath” AOL Music

If you happen to be lost in the woods of Sweden and stumble across a remote cabin you may come across a girl and boy duo making sweet ethereal music, the locals know them as The Deer Tracks, they know each other as David Lehnberg and Elin Lindfors. They are in the process of recording their final instalment of an epic trilogy. This triumvirate began with an ep The Archer Trilogy Part 1. Now Lehnberg and Lindfors have come out of their isolated, barely functional cabin to share with us the second instalment of the trilogy; a full-length album, The Archer Trilogy Part 2. “If you’re locked up in a studio where everything is perfect and there’s no wind or rain blowing in to destroy the recording—if you don’t push the boundaries —it’s gonna sound like you’re not trying to do something that’s real. But if you lock yourself up in a cabin in the woods, things start to happen. You’ll start to find your way back to your inner core, back to life,” says David of The Deer Tracks.

The Deer Tracks first came into our sights back in 2009 with their release of Aurora. Their unique, brittle, shard-like electronic compositions captured the imaginations of critics at home in Scandinavia, here in the UK and over the ocean in the US. The Deer Tracks exposed us to a treasure trove of instrumentation: electric guitars, melodica, trumpet, drums, piano, synthesizers, glockenspiel and music-boxes to create a sound of contrasts. Their sound is colossal yet finely detailed at the same time. Elin’s vocals offer a gentle and soothing tone reminiscent of that other pioneer of Scandinavian experimental electronica – Björk.

The Archer Trilogy Pt. 2 has an overwhelming sense of cellular fission as the delicate chemistry of the album unfolds and like ice crystals forming, the elemental influences are plain to see: Dance/Rest, Dark/Light, Abstract/Plain, Esoteric/Pop, Vast/Microscopic, Gentle/Savage. It’s an album of beautiful opposites.