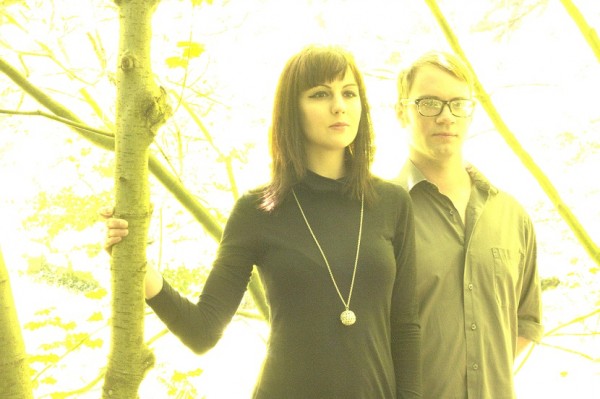 Patricia Hall and her boyfriend Ian Hicks have been enchanting one another with song since the spring of 2009. Their ﬁrst meeting was an audition. Ian was looking for a voice to compliment his moody, cinematic synthesizer sketches and Patricia hoped to meet the right partner to help put her day dreamy poems and keyboard melodies to music. Their mutual love of early 80s synth pop, the nascent incarnations of house and techno, ebm, krautrock, post punk, and the ﬁrst wave of industrial music set the course. After a few sessions together the partnership proved to be exactly what they had both been searching for and Soft Metals was born.

What began as a collaboration between songwriters soon budded into a passionate love affair. Song lyrics became secret messages, with which Patricia confessed her developing affection for Ian. The Portland-based duo’s ﬁrst ﬁve original works together, which became the EP “The Cold World Melts”, released on Captured Tracks, is a time capsule of this courtship.

This summer marks the release of their ﬁrst full length, a self-titled release with Captured Tracks. The album is a further expression of their romance, but now – 2 years into their relationship – the two are looking a bit more outward. They explore fantastical soundscapes which conjure the dramatic cinematic worlds of Dario Argento, Roman Polanski, Stanley Kubrick, David Lynch, and the Czech New Wave. Ultra-saturated colors with a touch of noir, opulent architecture, and mysterious femmes all spring to mind. From the deep examinations of the human psyche found in Adam Curtis documentaries (the subject matter of their track “Psychic Driving”), to the controversial bridge between science and the soul via Carl Sagan and Ray Kurzweil, the duo revels in the trans-formative power of love, knowledge, and imagination.

The outcome of all this is a collection of bittersweet electronic pop songs balanced by a delicate surrealism, a patient sense of experimentation that leaves you ﬂoating in your subconscious and moving to the beat . The sonic landscapes are sleek, but never icy. Even at her most dreamlike, Patricia’s vocals reach an eerie beauty that is always deeply emotional. This emotional force is mirrored in her lyrics. For example, the gloriously cinematic “Voices” features our heroine conquering her inner narrative of fear and weakness and ﬁnding the vitality to achieve her dreams. In “Pain,” Hall sings the word with an almost brazen conﬁdence. “It’s that pain,” she coos, in a song about the sometimes oceanic distance that develops between two souls, as though her familiarity with pain is so deep that she can begin to play with it. Finally, the vintage synthesizers and drum machines evoke a Space Age dreamer’s vision of the future as evidenced most clearly in the gorgeously atmospheric “Celestial Call”. Soft Metals have a strange nostalgia for a place not yet visited – a place where we live among the stars

OTHER LIVES ‘For 12’ video and UK tour dates announced