Joan of Arc UK Tour Starts Next Week, New Album ‘Life Like’ Out Now Via Polyvinyl 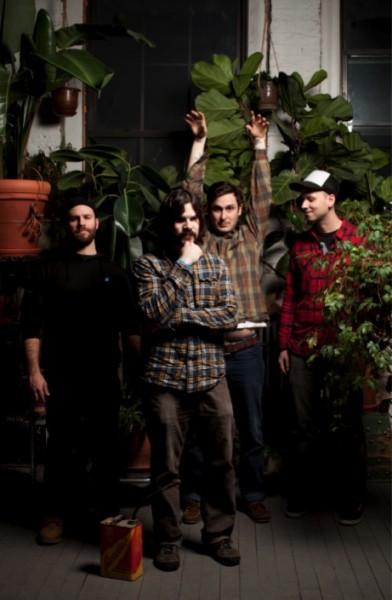 Chicago post hardcore pioneers Joan of Arc are about to embark on a UK tour next week. The newly embellished four piece comprised of former Cap N Jazz and Owlsmusicians Tim Kinsella and Victor Villareal will be playing songs from their latest album ‘Life Like’, available now through Polyvinyl Records. Support comes courtesy of Liverpool’s legendary post punkers Hot Club de Paris. Full details of these dates are below.

‘Life Like’ was recorded and engineered over 5 days with Steve Albini in Chicago’s Electrical Audio. You can hear a track off the album here, ‘Life Force’:

‘Life Like’ is Joan of Arc distilled down to/embracing its rock essence.

Gone from the band’s music (for now) are the electronics and layers upon layers of tracks. Gone from their liner notes are an extensive list of musicians and instruments. Instead, ‘Life Like’ is the result of four men adhering to Thoreau’s famous principle, “Simplify, simplify, simplify!”

But, when it comes to Joan of Arc, even “simple” isn’t an entirely straightforward concept.

Judging only by the record’s impeccable guitar-bass-drum interplay, it might be hard to imagine that ‘Life Like’ was entirely conceived with one less member than Joan of Arc ultimately entered the studio with.

After recording October’s two-song ‘Meaningful Work’ 7″ as a trio, frontman Tim Kinsella, drummer Theo Katsaounis, and bassist Bobby Burg (Love of Everything, Vacations, Chin Up Chin Up) welcomed guitarist Victor Villarreal (Owls, Cap’n Jazz, Ghosts and Vodka) into the fold shortly before leaving on a month-and-a-half tour of the U.S. and Europe.

Friends since childhood, Villarreal and Kinsella re-connected during Cap’n Jazz’s reunion tour and this marks the first collaboration between them since the 2001 self-titled Owls album.

After years of being away from music, being on tour with Cap n Jazz renewed Villarreal’s enthusiasm for joining a new band. As such, this new chapter in his musical career became one for Joan of Arc as well.

Although ‘Life Like’s nine tracks had essentially already been written as a three-piece effort, Villarreal was quickly taught the structure of the new songs and allowed to work out his parts while performing each night.

A prominent example of Villarreal’s influence comes in the opening seconds of the album’s first single, ‘Love Life’. Bolstered by his signature characteristic of doubling the speed of an existing riff, the track showcases the hyper-meticulous style of playing found on Owls songs.

And so, show by show, ‘Life Like’s other eight songs underwent similar transformations while the band was on the road. Villarreal improvised his parts live each night, with each new performance building on the last, while the other three members re-arranged their contributions during sound checks and traded ideas for improvements back and forth on the van rides between shows.

After playing 20 concerts in 20 days on European soil, the band returned home on a Tuesday night and then on Thursday morning -before the jet lag could even wear off – entered Chicago’s Electrical Audio with Steve Albini (who has previously engineered records for two other Kinsella projects: Owls and Make Believe).

Although thoroughly exhausting, this hectic schedule was actually beneficial — as Kinsella reveals “it removed all threats of cleverness from our critical faculties” and required the band to stick to strictly recording the new tracks as they had been played live.

And yet, as ‘Life Like’ proves, even when they’re working solely with the basics – guitar, bass, and drums – Joan of Arc still has the power to wring new sounds from the same old rock band machinery.